I attended the April 11 performance of the San Francisco Symphony at Davies Symphony Hall with Herbert Blomstedt conducting. There were two pieces on the program--Mozart's Piano Concerto No. 21 before intermission, with Garrick Ohlsson at the piano, and Bruckner's Symphony No. 4 after the break. 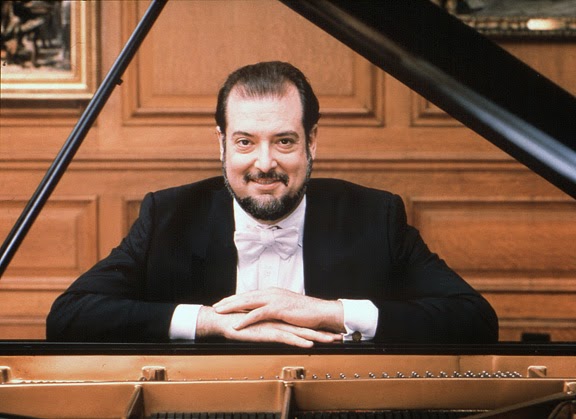 The Mozart concerto is probably his best loved, his best known. How many times have I heard it on the radio or on recordings I own? I have no idea, but I'd never heard it performed live before. And what a pleasure to hear Ohlsson play it with such precision--every note articulated, every note in its place--played without fuss, without idiosyncratic imposition of self. This was perhaps the purest Mozart I've ever heard. Ohlsson seemed transparent. By none of this do I mean to suggest Ohlsson's playing was mechanical, lacking emotion, or sterile: Quite the contrary. Ohlsson's genius was very much evident. By communicating the writing so simply and clearly, he achieved far greater emotional impact than many who try much harder. Ohlsson appeared concentrated and involved, entirely confident and content, engaged in a restrained dialog with the orchestra, focused on his fingers and the keyboard with no extraneous movement. It was simple. It was beautiful. It was simply a beautiful performance. The audience was very appreciative, bringing Ohlsson back on stage several times (although the hoped-for encore did not materialize). I noticed in the program  that Ohlsson uses cadenzas by Radu Lupu, one of my favorite pianists.

During my freshman year of college--when I first started exploring classical music seriously--I listened to Bruckner  quite a lot, but moved on to other things fairly quickly (there was so much new to hear). Doubtless I've heard snippets of Bruckner on the radio since then, but I can't recall sitting down and listening to a recording of a Bruckner piece since that time--for several decades, in other words--and last night was the first time I'd ever heard anything by Bruckner live. Although, I do vaguely remember that the Symphony No. 4 was my favorite of the symphonies, the familiarity of the piece was something of a surprise--at one time, I must have known it well--but I've never heard it before like last night. 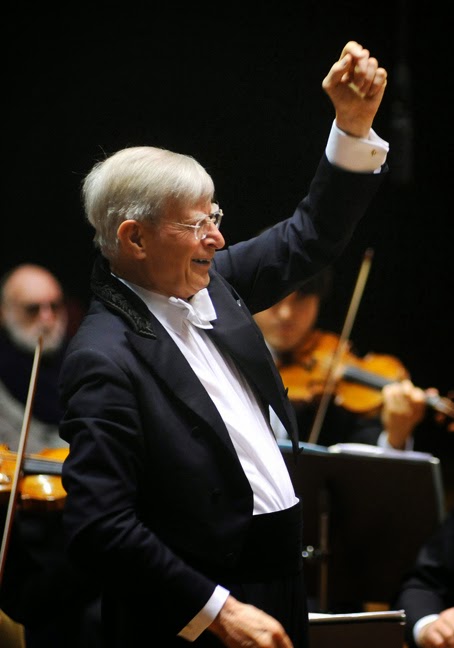 While the Mozart performance was superlative, the Bruckner was even better--one of those concert hall experiences that make you inwardly (sometimes outwardly) giggle with joy, one of those experiences that give you goose bumps. I don't know what to say except that the orchestra--always very fine--seemed in top form, every performer in synch with the rest of the players and with the conductor, who must know this piece very well, as he conducted with no score.

The tempos seemed perfect throughout. The challenging horn entrances were handled beautifully. Blomstedt elicited wonderful performances especially from the darker sections of the orchestra--notably the double basses, the bassoons, the low end of the brass section, and the violas. Easily the best performance of the Bruckner Symphony No. 4 I've ever heard--and am ever likely to hear. While it is a very long piece and it gets a bit repetitious (especially in the third movement), it's full of melodic invention and textures and it has quite a few hooks that satisfy. My thanks to the conductor and all the performers for giving me a renewed appreciation of the piece.

The rest of the audience seems to have felt much as I did. A sustained standing ovation began immediately after the maestro lowered his hands. Blomstedt, looking a bit frail but very lively nevertheless, delighted in acknowledging the various sections of the orchestra. I think the French horns and the violas got the biggest surges of applause. I'm happy especially for the violas, who always seem to get less attention than they deserve. A memorable evening. 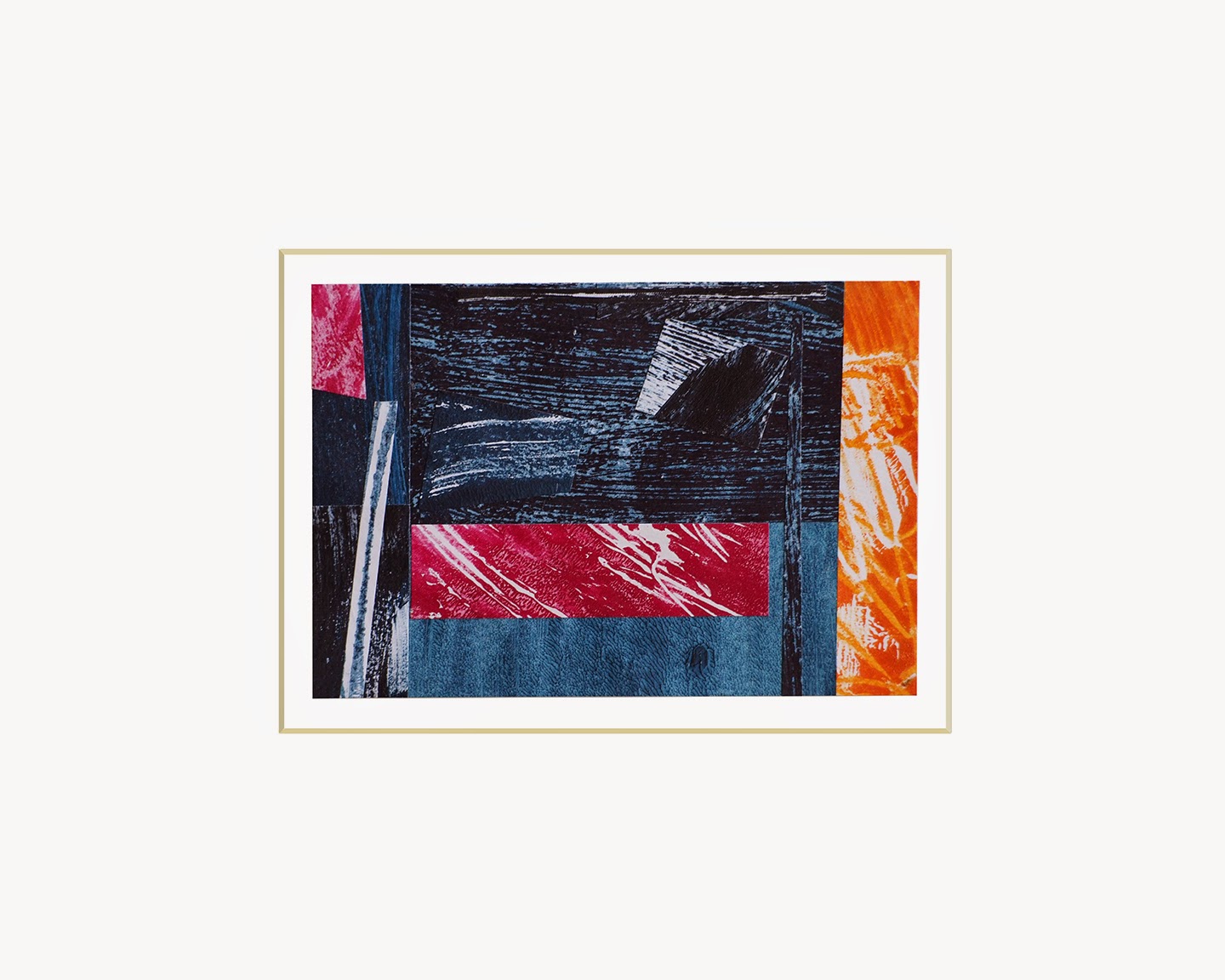 Another collage, again using paper either painted directly with acrylic paints or mono-printed. This one uses vaguely calligraphic effects in some of the elements, notably the orange section on the far right and the central magenta swatch. April 1, 2014.

Beekeeping: Bees Are Back 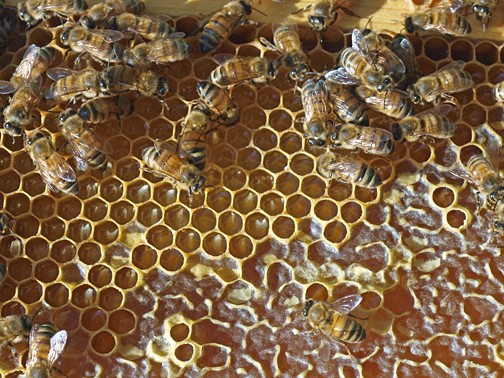 I lost my bees last season--again. The hive has been sitting empty all winter, inhabited mostly by foraging ants. It was getting to be about the time to find a new swarm. I was going to post an ad on Craig'sList, as I did last time I needed bees.

Last year, I picked up new bees from a man in Vallejo with a couple of hives, one of which had swarmed. The swarm was hanging in a plum tree over his garage. Retrieving it involved climbing up on the roof. This year I've been spared that kind of trouble. I noticed a few bees around the hive entrance at home about a week ago and a lot of activity a few days later, suggesting a swarm had moved in on its own. Checking today, I see normal spring activity--a lot of bees coming and going. Bees coming in are packed with pollen, so they're raising brood. Nice to have the bees back.
Posted by Colin Talcroft at 2:05 PM No comments: 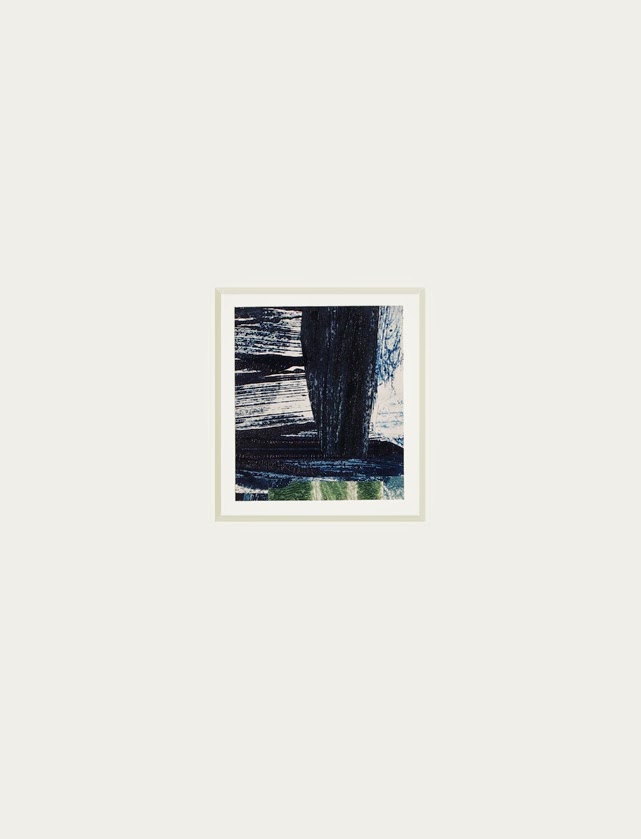 Another collage. This one very small (only 6.7 x 7.7cm)--but size is not always important. Acrylic on paper, mono-printed elements, collage. April 1, 2014. Although unintended, this one gives me the impression of looking at a dusky landscape, perhaps by moonlight, with a large, old cypress tree in the foreground....

Click on the image for a larger view. For more, use the Art I'm Making tab to the right or visit my collage and photography website at http://ctalcroft.wix.com/collage-site/ (requires Flash Player).

Posted by Colin Talcroft at 11:21 AM No comments: 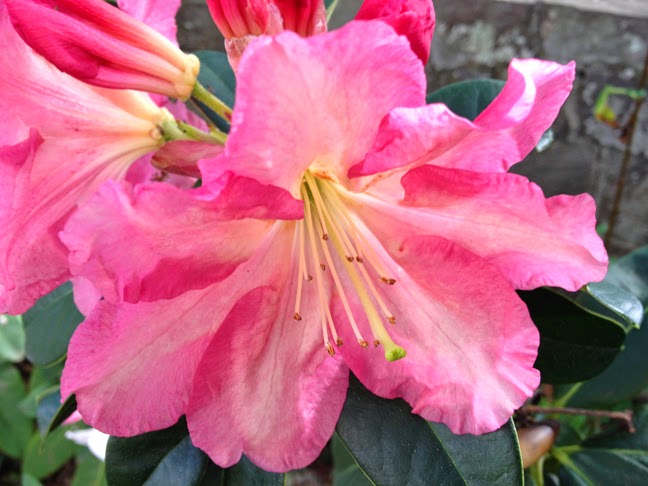 One of our Rhododendrons has just come into bloom. The first flower opened on April 8. I realize that I've lost track of the name of this one, but it's pretty nevertheless.
Posted by Colin Talcroft at 12:12 PM No comments: 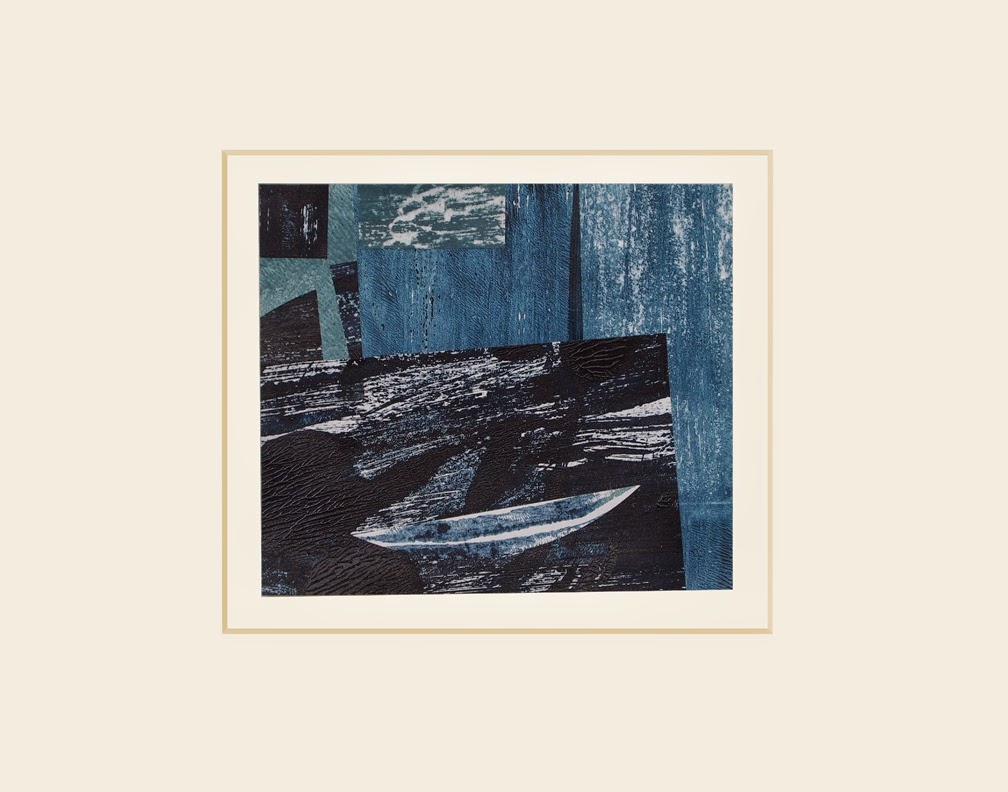 New collages. Four new collages, to be exact, made in a spurt of activity between bouts of work in the past ten days or so--both the translating work I do and the landscaping work I've taken on at one of the local wineries.

This one is all in indigo tones. It has a somewhat maritime feel, although that was not intended. Something about it also reminds me of the 1950s--again unintended. I work strictly in the abstract--with color, form, texture, line. Acrylic paint on paper, mono-printed elements, collage. April 1, 2014. Image size, 14.2 x 12.2cm.

Click on the image for a larger view. For more, use the Art I'm Making tab to the right or visit my collage and photography website at http://ctalcroft.wix.com/collage-site/ (requires Flash Player).