I attended the Friday, September 12 performance of the San Francisco Symphony. The program included Rossini's overture to La Gazza Ladra, Alternative Energy by Mason Bates, and Beethoven's Piano Concerto No. 1. Leif Ove Andsnes was soloist in the Beethoven concerto. Michael Tilson Thomas conducted. The orchestra gave a lively performance of Rossini's very familiar overture (although I would not have been able to name it before I had read the program), getting the evening off to buoyant start before shifting gears to a very modern piece, the Bates, which was composed in 2012.

The program notes say the San Francisco Symphony has done of series of concerts during the past two seasons pairing the music of Mason Bates with pieces by Beethoven, and this was another in that series, but nowhere does it explain why these two composers have been paired. I imagine there is a notional link, but it isn't obvious to me and the program had nothing to say about the juxtaposition, which was a little annoying (the failure to explain was annoying, that is). Personally, I'd rather hear a program of all modern music or all music of whatever period, unless there's some compelling reason to pair two pieces that are very different in style. 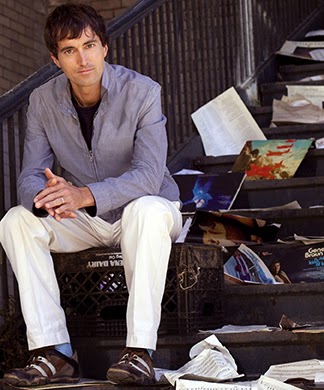 Composer Mason Bates wrote an extensive comment on Alternative Energy for the program notes. The piece begins, we are told, on a rural farm in 1896 and takes us to 2222, in Rykjavik, by way of Chicago (in 2012) and Xinjiang Province (in 2112). The piece is described as "an energy symphony" that moves from the cranking of an automobile engine, to sounds of contemporary Chicago, to scenes of a futuristic Chinese energy industry (including a meltdown), and finally to a post-apocalyptic Icelandic rainforest, before ending with "the occasional song of future birds" and "distant tribal voices" that call for fire "our first energy source." A motif played first on the violin (by Associate Concertmaster Nadya Tichman) recurs throughout the piece, often as a violin line, but in other guises as well. The composition includes recorded sounds played back through a surround-sound sound system that were nicely integrated--which is often not the case when electronic and live instrument sounds are used together. Some sections had a clearly Chinese feel (with the violins sounding like an erhu), other sections suggested gamelan music, sometimes the mood was jazzy. There was a cinematic sweep throughout. I thought the piece consistently interesting. I very much enjoyed the performance but didn't feel the need to know the "story" behind it. The audience was very appreciative. The composer appeared on stage to take bows along with conductor Thomas and the orchestra. He seemed very pleased with the performance, which was recorded for possible future release. 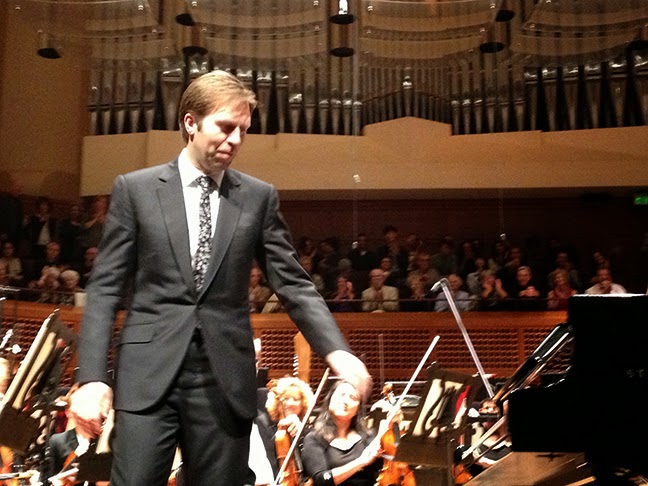 After intermission, Leif Ove Andsnes gave a controlled but lively rendition of the Beethoven piano concerto that was very well received by an appreciative audience. The applause lasted long enough to bring Andsnes out again to play two Beethoven bagatelles as an encore. Andsnes looked very sharp in a nicely tailored suit. The quality of the fabric it was cut from was apparent even from the audience (although I was seated in the second row and right in front of the piano). The concert was a very nice start to the 2014–2015 season.

(Photograph of Mason Bates by Ryan Shude, courtesy of the San Francisco Symphony website.)
Posted by Colin Talcroft at 8:37 PM No comments: 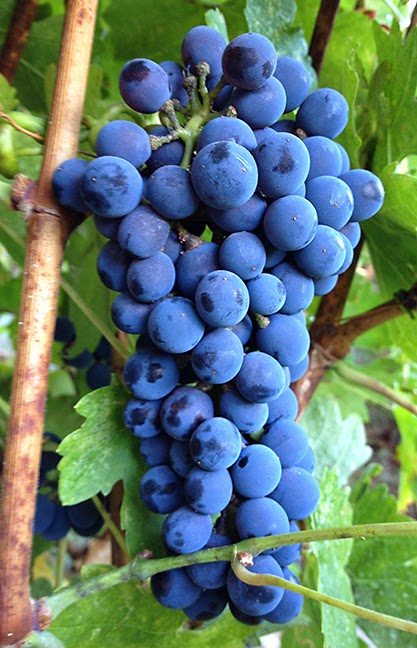 I did a full sampling of the fruit in our little vineyard on the 12th, the first serious look I've taken at picking the grapes so far this year. The Cabernet vines showed 23.8 Brix at a pH of 3.30, which is fairly close to ideal, but I'm afraid some of the sugar level reflects dehydration rather than full ripeness of the fruit. September 12 is about a month earlier than the usual harvest date. I will continue to monitor the sugar levels. I usually like to pick at about 24-25 Brix with the pH no higher than about 3.5. One theory says that the pH level squared times Brix should ideally be at 260 for picking. My September 12 numbers yield 259--so technically ready, but I will wait at least another week, perhaps two, unless the sugar or pH levels seem to be rising precipitously.

The Sangiovese grapes look a little less ripe, showing 20.8 Brix and a pH of 3.44. I usually like to pick the grapes for the rosé we make from the Sangiovese at about 22 Brix with the pH as low as possible. So, as with the Cabernet, I'll be monitoring the grapes over the coming week or two to see how things are progressing.
Posted by Colin Talcroft at 3:29 PM No comments: