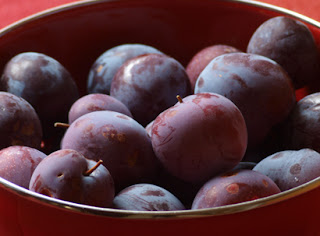 After more than two months away, it's strange to be home again. I'd gotten used to the rhythm of southern France and the driving (roundabouts everywhere and drivers showing rather more exuberance behind the wheel than is common here--despite the very narrow streets and country roads lined with massive plane trees, most with telltale patches of bark missing at bumper level). I'll miss the fresh baguettes and the cheap wine and cheese.

Everything looks insubstantial here compared with the stone and iron of the little French villages. It will take a few days to adjust, many more days to clean up the garden, which is overgrown and in need of water, despite the very cool temperatures Santa Rosa seems to have had. Many flowers are still blooming that are normally finished by late June. Everything seems to be about six weeks behind--although the Flavor King pluot had a lot of fruit this year. Yesterday I picked what the raccoons hadn't already eaten. When will we harvest the grapes? Late October or early November even? The taxi driver from the airport said it's been called the coldest summer here in 50 years.

Is post-vacation depression a recognized condition?
Posted by Colin Talcroft at 11:01 AM No comments: 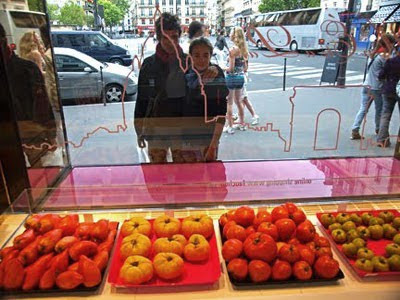 Back in Paris again on the evening of the 12th, a couple days ahead of departure for home on the 15th. The drive into Paris from Normandy was an easy three hours. Had planned to arrive earlier in the day, but ended up leaving Caen later than anticipated. The Peace Memorial Museum in Caen takes several hours to see. Found a place to park the car in Paris right in front of the apartment (miraculously). Interestingly, all parking in Paris appears to be free during the month of August. Perhaps the luck in parking was not so hard to explain, the entire city was strangely quiet. More tourists than French people--or so it seemed. Many shops were closed for the annual vacation everyone seems to take simultaneously. 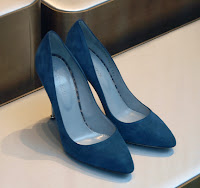 Did some last-minute gift shopping--and some last-minute sightseeing. Took a look at La Madeleine, which I'd never been inside of before; looked in on the ultra-fancy stores nearby (Fauchon, Hediard, and Nicolas--the young couple in the photo above looking longingly at the tomatoes is peering in at one of the windows at Fauchon); walked around the Place de la Concorde and the Etoile; and spent most of the end of the day visiting the Musée de l'Orangerie, which I'd never seen before--despite a number of attempts in the past. On my walk back to the apartment from Trocadero station, I stopped in at the Cimètiere de Passy again for a final look at some of the famous graves there. Dinner in the evening with the same friends we saw on the first days of the trip was a nice way to end a nine-week stay in Europe. 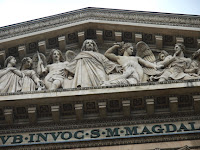 La Madeleine is a church masquerading as a Greek temple. I thought it rather dark and depressing inside, although there's some interesting sculpture and the bronze doors are impressive. It is said to have been modeled on the Maison Carrée, which I remember seeing at Nîmes years ago. The Maison Carrée is one of the best preserved Roman-era temples in the world. The very Greek exterior of La Madeleine seems an odd way to enclose a Christian space. Its construction appears to have been very mixed up in conception from the outset, with a number of false starts and sudden changes of design in the middle of the work. While the building is a fairly coherent Greek-style temple from the outside, taken as a whole, the confusion shows. 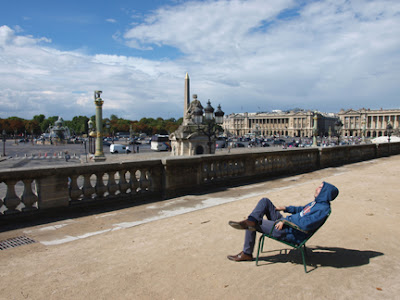 I enjoyed seeing the Musée de l'Orangerie, and it was a good way to get out of the drizzle that had started while walking around the Place de la Concorde. I saw the bronze marker in the Place that refers to the executions during the Revolution. I see that it doesn't actually indicate the spot of any particular execution. It says merely that Place de la Concorde was the principal scene of most of the public executions that took place during the Terror. I missed the marker that indicates the starting point for the measurement of France's highways, which is supposed to be set in the pavement of the Place (at Notre Dame it was noted that distances between Paris and all other French cities are measured from the spot between the two towers of the cathedral), but the obelisk and the two large fountains were worth a look. I have ridden through the Place in taxis on a number of occasions, but had never actually walked around it. 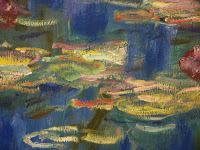 The museum houses Monet's Nymphéas, his last major group of water lilies, painted between 1920 and his death in 1926, and (since 1965) the Jean Walter and Paul Guillaume collection of impressionist and post-impressionist works. The water lilies are displayed in two linked oval rooms preceded by an empty vestibule Monet intended as a buffer zone between the life of the city and the mood of contemplation he wanted for the paintings. The rooms are lit from above by a very pretty diffused light (again, Monet's own preference). No photograph of them from any distance can convey the feel of the paint on the canvas. In person the temptation is to walk up close to the paintings and examine every stroke of color, getting lost in the abstract patterns that emerge as the overall picture dissolves into incoherence. Just as strong is the temptation to walk backwards away from the paintings to watch the seemingly random paint marks coalesce into images of flowers on water, reflected sky, shadows of trees, and overhanging branches. 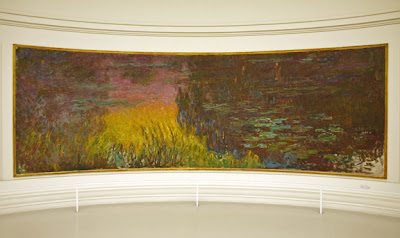 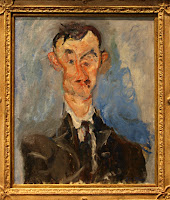 The remainder of the collection was worth seeing as well. There are quite a few paintings by Cézanne and Gauguin I'd never seen before. There are many (too many, in my view) by Renoir, works by Matisse and Picasso, and an interesting group of paintings by Chaim Soutine that I really enjoyed seeing. I've always liked his distorted, sloppy but sympathetic portraits. The collection also includes works by Derain, Rousseau, Utrillo, Laurencin, Sisley, and others. Modigliani's wonderful portrait of Paul Guillaume is here and one of the larger reclining nudes is also in the collection. 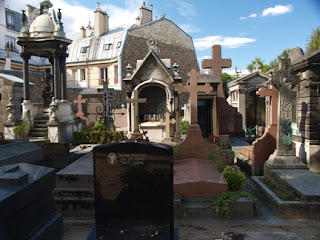 On the way home, I stopped at the Cimètiere de Passy, hoping to see a few of the famous graves there. Having enquired at the guard station and with map in hand I set off to find Claude Debussy, Gabriel Fauré, Edouard Manet, and Berthe Morisot. An older Frenchman was on his way to showing a couple from South Carolina Fauré's stone and I tagged along. I'm not sure how these three met up. The Americans just seemed to have been passing by. I asked the man if he was connected with the cemetery, because he knew it so well. He described himself as simply a man interested in history. I ended up interpreting for the couple--which was a bit of a surprise; my French, while still rudimentary, has made a lot of progress. He showed us many other famous graves, including several early French aviators, Vietnam's last emperor, and a daughter of the Shah of Iran. One of the co-founders of Renault is buried here. Members of the Lapostolle family (creators of Grand Marnier) are buried here as well (Lapostolle is a name I know in connection with wines from Chile--this is the same family). A busy but satisfying day.
Posted by Colin Talcroft at 9:53 AM No comments: