I attended the March 7, 2013 performance of the San Francisco Symphony at the Green Music Center. Michael Tilson Thomas conducted Drift and Providence, by Samuel Carl Adams, the Beethoven Piano Concerto No. 4 (Yuja Wang, soloist), and the Brahms Symphony No. 1.  Conductor Thomas led a precise and satisfying interpretation of the Brahms symphony with an especially lush second movement. The woodwinds in particular were memorable, especially the oboe in the first movement, the clarinet in the second, and the flute in later movements. The oboe sounded especially poignant following the sudden unexpected death of the Symphony's principal oboist, William Bennet, February 28, following his collapse from a brain hemorrhage on February 23 during a performance. The basses, trombones, and percussion were remarkably resonant. This new hall seems to emphasize the low end of things. I wonder if conductors have to learn a new hall and adjust their performances to it? I imagine they do. The tympani at the end of the piece were played with special verve, I thought. 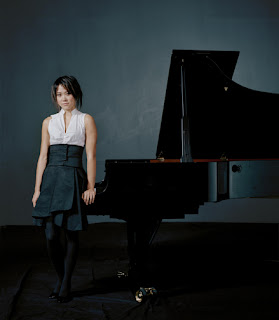 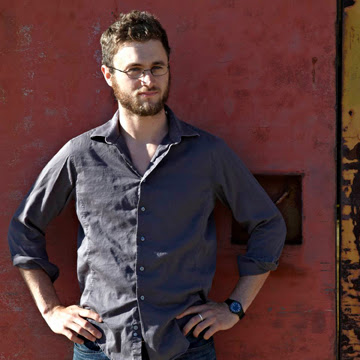 To me, however, the highlight of the evening was the opening piece, Drift and Providence. I didn't realize until today (reading the program notes) that Samuel Adams is the son of composer John Adams. It runs in the family, apparently, as does art generally: His mother is photographer Deborah O'Grady. I also see from the liner notes that the piece is in five movements, each of which is labeled with references to the West, and San Francisco in particular. Listening to the piece for the first time without knowing that, I'd have been hard-pressed to say where one movement began and another ended. The music clearly had sections, but the overall effect was of a broad, multifaceted, shifting layer of sound with no clearly defined breaks. Talking with the composer after the concert, he called it "kaleidoscopic." It gave me the impression of a progression from a mellow, sleepy state to a new state of consciousness more agitated and aware than the first, followed by a kind of compressed recapitulation of that progression and then a raucous summing up. The early parts of the piece suggested metal wind chimes, a gamelan orchestra, wind, and waves--but all as if heard with the ears of someone heavily drugged--this followed by a shift (the "drift" of the title, no doubt) in the direction of something brighter. The dreamy, shimmering quality of much of Drift and Providence is enhanced by the use of a computerized feed of processed sound, manipulated by the composer during the performance. It's a piece I'd like to hear again.

We attended a gathering for the artists after the concert. Yuja Wang decided not to appear. Michael Tilson Thomas looked bored and distracted and eager to leave--not that I blame him. Samuel Adams was a delight to talk with. It turns out he lives in Brooklyn, where I spent my earliest years. He even knew the street I lived on, St. John's Place--our stickball field.

Storms earlier in the week brought strong winds and a little more rain. We got 0.55 inches at my location. That brings our total for the 2012-2013 rain year to 23.45 inches. Average for this date in March is a little over 29 inches, so we are about 5.5 inches below normal now, having been nearly 10 inches ahead near the start of the season.
Posted by Colin Talcroft at 9:21 AM No comments: 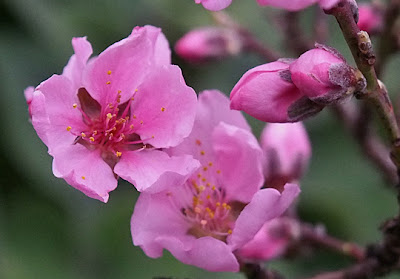 Activity is beginning to pick up in the garden, although it's started pouring with rain today, which will likely ruin the flowers on the fruit trees. In the past few days, the Flavor Queen pluot and the Santa Rosa plum have come into bloom. The golden current (Ribes aureum) is in full bloom (photo below). The manzanitas are blooming, and the dwarf peach and nectarine behind the house are coming into bloom as well (photo above). 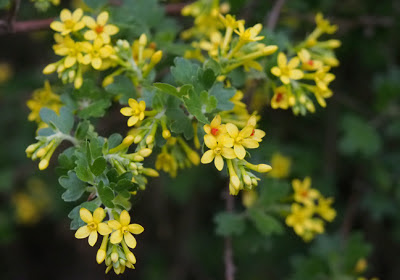 Posted by Colin Talcroft at 10:00 PM No comments: 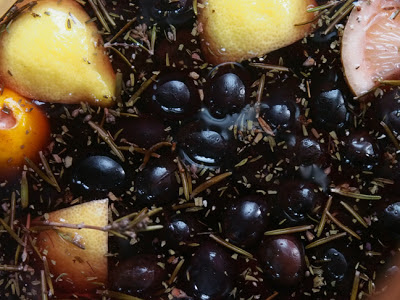 The olives are coming along nicely. They've been in brine for going on a month now. I started them on February 10. Two years ago when I made olives I simply brined them. This year, following a recipe my neighbor used, I left them in brine for the first three weeks, but a few days ago I drained them and put them in containers with new brine, substituting a quarter cup of red wine vinegar for some of the water and added lemons, bay leaves, and a mix of herbs, including rosemary, thyme, marjoram, and savory--in a typical herbs de Provence sort of blend. The rosemary is from the garden. The smaller olives (I used two varieties, one from our own tree, one from a neighbor's tree) are nearly ready. In fact, I may transfer them back to plain brine sooner rather than later so they don't take on too much of the vinegar character. The larger ones are still somewhat bitter and will require another week or so. The brining seems to take about five to six weeks. So far, they look (and taste) very promising. To see the original post on this blog about this year's olives or about making olives in past years, search on "olives" in the search box.
Posted by Colin Talcroft at 2:22 PM No comments: 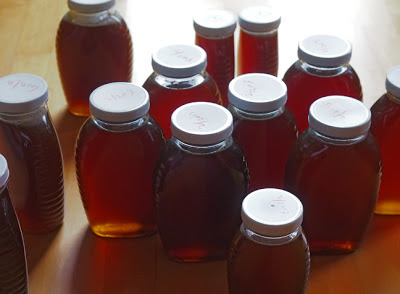 The past few days have been occupied with harvesting honey from my beehive. Sadly, we lost the bees again this year. With no bees to tend the comb, I decided I'd have to remove all the honey from the hive to avoid its being ruined or robbed by other bees or wasps. It took four days--mostly because I was extracting honey in the midst of doing other work, but it was still a big job. I harvested enough honey for a couple of years at least (55 pounds). Local friends and family will be getting presents, but I may try making mead.

The hive does not appear to be diseased. It's not clear what happened. I had seen activity as recently as about three weeks before I realized something was wrong. On one of the few recent warm days we've had, no bees were entering or leaving the hive and it was clear that the colony was lost. I'm hoping to find a swarm of bees as soon as possible, to get the hive going again.
Posted by Colin Talcroft at 2:10 PM No comments: