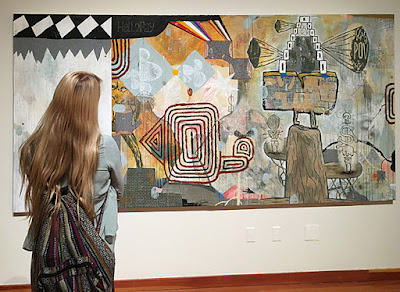 I attended the opening last night (November 3, 2016) of a show of contemporary painting at Sonoma State University's University Art Gallery, tucked away in a corner of the campus and hard to find (I wonder who thought it was a good idea to give EVERY building on the Sonoma State campus the same address?) but worth the trouble. "Cries and Whispers" features paintings by two Northern California painters, John Yoyogi Fortes and Cate White.

Both painters draw in a way that seems deliberately intended to look less skilled than it really is, White using a nervous, wiry line, Yoyogi Fortes a thicker, weightier line. Both painters make narrative paintings, White's seemingly grounded in reality, Yoyogi Fortes's more abstract, a little surreal. Both painters use layering and juxtaposition of apparently random elements that give the works a graffiti-like look. The work of neither painter would look out of place in an urban concrete setting. It's easy to see why this pairing made sense to the curators. 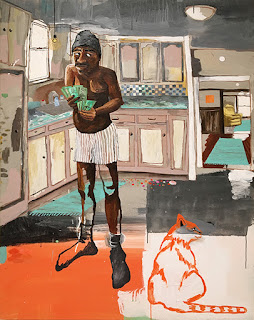 While the two painters clearly have affinities, they have different concerns. Cate White's work is intensely personal. Assuming the named characters peopling her canvases are real people—people she knows—she is recording significant moments in her life. If these are fictional people, there is at least a recurring cast of characters. "Rory" is one such character. Among the most memorable paintings by White is Rory Counting His Money (2015, acrylic on wood panel), in which we see precisely that: Rory, secretively counting money in a kitchen, seemingly worried about who might observe him, perhaps someone in the room pictured through an open door behind him. The kitchen is crudely depicted but realistically enough drawn in the top half of the painting to make it easy to accept the space on its own cartoon-like terms, but White pulls the carpet out from under the viewer in the bottom half of the painting by making Rory's legs transparent, by suddenly shifting to an abstract depiction of space roughly blocked out with patches of flat color. And Rory's cat, too, is transparent. The orange outlines of the cat and the orange patch beneath Rory's boots are jarringly set against the aqua highlights in the room. The real world dissolves here. In other works, White again uses this transparent effect to keep things one step removed from reality. 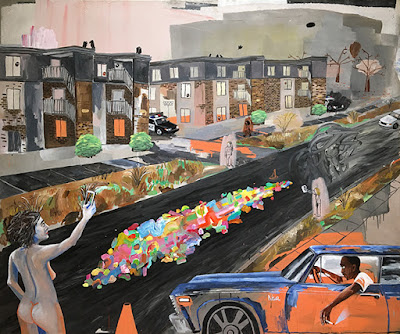 In Dre Looking at Me at the Mike Brown Memorial (2015, acrylic on Canvas), a nude female figure is one of several figures (the others clothed) that hold up cell phone cameras to snap photos of the pile of stuffed animals and other objects that appeared in Ferguson, Missouri's Canfield Drive as a spontaneous memorial at the site of the police shooting of 18-year-old Michael Brown, in August 2015. If the female figure is White herself, the image shows an outsider both observing and being observed—observed by people local to the scene (the man in the car, Dre), the scene under the surveillance of police cars tucked away into nearby alleyways. Why the foreground figure is nude, I cannot say. In other paintings, a prison visit is depicted; a woman, possibly the artist, stands naked, peeing in the shower; a soldier, flanked by two dogs sits in an ambiguous space (apparently on a sofa placed outdoors), a pair of phantom arms holding his gun. 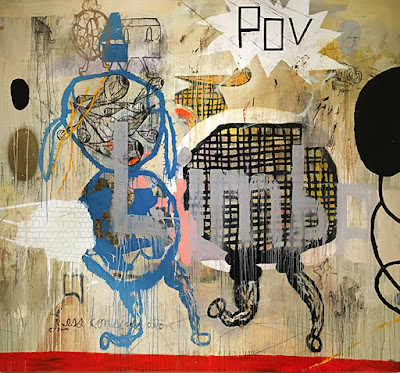 The work of Yoyogi Fortes is bolder. In some ways it appears crude. The thick, clumsy outlines are reminiscent in places of Philip Guston's late work (itself a crude departure from his earlier representational work). At the same time, however, Yoyogi Fortes is a subtle colorist and his concerns are more painterly than White's. He works in layers. There are splashed areas of dripping paint. Some layers are applied, sanded down, and then overlaid with new layers. Thin, wiped layers float on top of textures left behind by thicker, sculpted layers underneath. The surfaces are of interest in themselves. 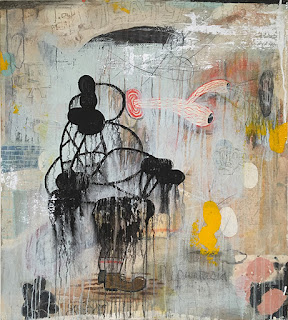 The cast of characters is more abstract than in White's work. It includes a stylized monkey face and headless bodies with skinny, booted legs (or heads on legs, reminiscent of Spongebob Squarepants). Recurring symbols include dollar signs and elongated, bloodshot eyes (R. Crumb comes to mind), and brick walls or linear grids. There is frequent use of irregular blobs of pure color that help to rob the paintings of depth—the flatness and the color blobs reminiscent of Japanese techniques, the first associated with traditional woodblock prints before artists in Japan were widely familiar with Western-style perspective, the latter a favorite technique of certain schools of contemporary Japanese abstract printmakers—as in Sweaty Pickle (immediately above: 2016, acrylic, pencil, charcoal, enamel, and collage on canvas). The positioning of these various elements on the canvases suggests narrative in some places, particularly the narrative style of manga or other graphic novels. Elsewhere, the elements appear more randomly placed, more like graffiti tags on walls that have been tagged and covered, tagged and covered repeatedly—although, no doubt, the artist is making decisions about placement based on compositional concerns. Text fragments commonly appear, as in POV (above: 2015, acrylic, enamel, charcoal, pencil, collage, and glitter on canvas), again suggestive of graffiti or street art, a style very much in vogue these days. Not all the pieces by these two artists are immediately appealing. It took me a while to warm up to some of the work, but I left the show glad I'd made the effort to see it. The paintings of both artists are worth a look. Recommended. 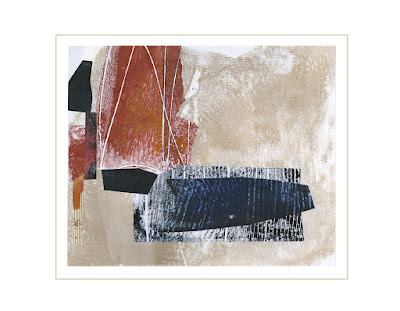 My latest collage. This is another done during the recent Sonoma County Art Trails open studios event. This piece (and many others) is now on view on The Art Wall at Shige Sushi (through December 31, 2016, opening reception Monday, November 7, 5:00PM to 7:30PM.) Come by and see it, and me, and have a glass of wine--or two.

Click on the image for a larger view. For more of my collage work, visit my collage site at http://ctalcroft.wix.com/collage-site.
Posted by Colin Talcroft at 6:06 PM No comments: