The winery activity around the house has peaked and slowed for the season. Next I need to think about harvesting honey, but I doubt I'll have time ahead of the rains predicted for early next week. At present, the Cabernet Sauvignon and the Zinfandel are quietly undergoing malolactic fermentation in the living room and the Sangiovese rosé is still fermenting in the garage on day nine. This fermentation is already more than twice as long as what has been normal using the Epernay II yeast. Typically, the rosé has fermented in about four days--rather violently. I'm hoping the slow, extended fermentation this year will make the wine even better.

Once again being left with still useful-looking pressings from the Cabernet this year, I decided to make a second-run wine. It may be horrible, but at least I'll know it's not worth doing twice. Into the skins and seeds left over after pressing, I added 6 gallons of water, 10 pounds of sugar, and just over 2 ounces of an acid blend (combining tartaric, malic, and citric acids). Fermentation began again spontaneously. So far, it has behaved just like a normal fermentation. It's remarkable how much color is left in the skins. The wine is already a respectable red. I hope there is enough flavor left in them to make the wine at least palatable.
Posted by Colin Talcroft at 12:39 PM No comments:

Pressed the Cabernet this evening. 10 gallons of must yielded six gallons of pressed wine. Beautiful deep purple red. Smells wonderful. Inoculated with Enoferm Alpha to start malolactic fermentation. Celebrated by opening a bottle of the 2007 Cabernet, which keeps getting better. Also inoculated the Zinfandel for malolactic fermentation. The wine is resting in the living room, wrapped in a blanket and a heating pad.
Posted by Colin Talcroft at 10:27 PM No comments: 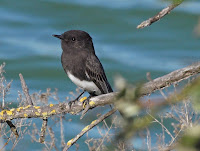 Spent a couple hours out at Shollenberger Park this morning, in Petaluma. The areas closest to the paths are mostly dried up by now, but there were a fair number of birds in the distance. Using my new spotting scope, I was able to identify a few things--song sparrows, black-necked stilts, marbled godwits, willets, turkey vultures, Western sandpipers, a paler sandpiper (probably sanderlings), killdeer, snowy egrets, great egrets, ring-billed gulls, and a few long-billed curlews. These last were a first sighting for me. The bird in the photo is a Black Phoebe.
Posted by Colin Talcroft at 3:31 PM No comments: