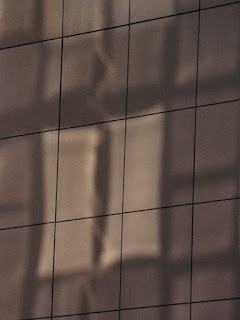 Light from the silvered windows of a building in San José made this pattern of light and dark on an adjacent building. Unintended art.

For more unintended art, see my blog Serendipitous Art.
Posted by Colin Talcroft at 9:30 AM No comments: 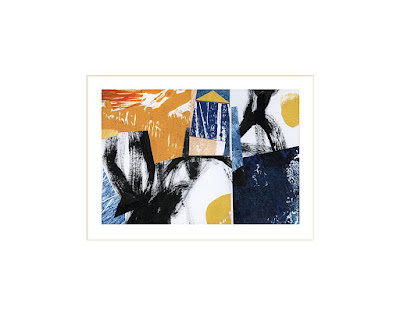 I finished a new collage on February 14—Untitled Collage No. 128 (Santa Rosa), this one using both monoprinted and painted papers. Image size: 17.6 x 12.1cm. Matted to 20 x 16 inches. Signed and dated on the reverse. Signed on the mat.

[Update: This image was subsequently sold to Imagery Estate Winery and is in the winery's permanent collection. It appeared in 2017 on the label of their 2016 Muscat de Canelli.]

Click on the image for a larger view. For more, visit my collage website at: http://ctalcroft.wix.com/collage-site/
Posted by Colin Talcroft at 12:25 AM No comments:

We had the first new rain today, February 17, since February 2. By afternoon 0.45 inches had accumulated and it was still raining early into the morning of the 18th. The total was 17.65 inches on February 2, which means we are now over 18 inches, but rain is in the forecast for the next day or two.

[Update: By the morning of February 18 (that is, by the time I awoke on the 18th), there was 0.90 inches of new rain in the rain gauge. That brings our 2015-2016 total to 18.55 inches at my location in Santa Rosa, although other stations are reporting somewhat less. The historical average for February 18 in Santa Rosa is 24.53 inches, so, the two-week dry spell that just ended set us back considerably. We are six inches behind normal again. What happened to El Niño?] 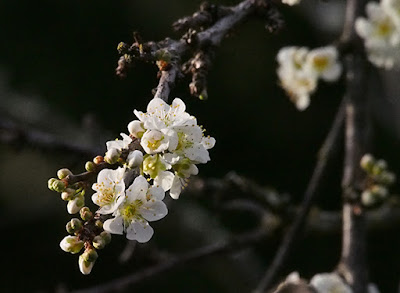 I belatedly report on some of the plants that have recently started blooming in the garden. February 5 brought the first blooms this year on the pink flowering plum behind the house (Prunus blireana) on the golden currant bush (Ribes aureum). The pluot "Dapple Dandy" (top) began blooming on February 11 this year. 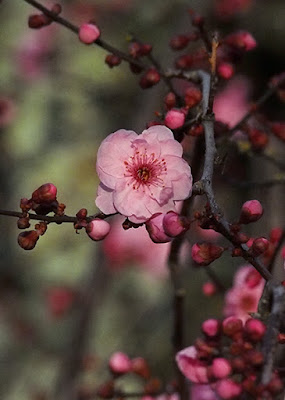 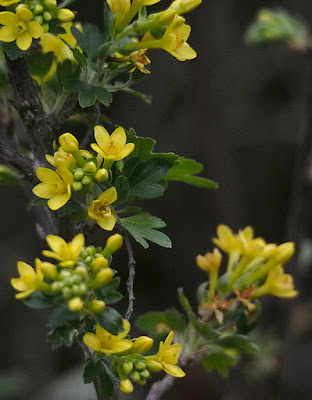 Posted by Colin Talcroft at 7:09 PM No comments: 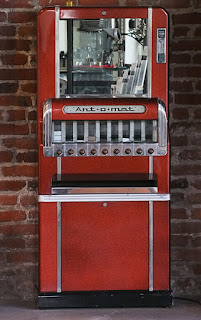 I visited the Rayko Photo Center in San Francisco yesterday for the first time, a place I've known about for a couple of years but never quite made it to. I wanted to see the current show, but also wanted to see the Art-o-Mat® at Rayko, one of several in the Bay Area, and one of 11 in California. I've long had a vague idea it would be fun to visit them all. This is the second I've seen in person. (An Art-o-Mat® is a vintage cigarette machine converted to dispensing art rather than cigarettes. For more about the Art-o-Mat®, see this post.)

The Photo Center has camera displays (some for show, some for sale), formal gallery space, some informal space that was showing student work, a large selection of the work of local photographers for sale, and rental studio space and darkrooms (both digital and analog), as well as work areas for mounting and matting prints. The center has a regular schedule of classes. Virtually everything to do with photography is here. There is even a vintage photo booth in the space.

Among the photographs for sale, I particularly liked work by Ryuten Paul Rosenblum, Cherie Mayman, and Nicolo Sertorio. I was impressed by Ella Dean among the student photographers. Cherie Mayman's piece was a blurry, dreamy platinum print of what looked like bottles suspended in the air. 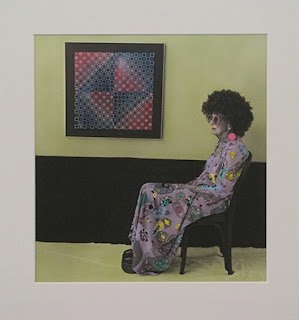 The main show was Self and Others, work by Aline Smithson from a number of different series. A few of the images are black and white. Most are large color prints. The various series—portraiture broadly defined for the most part—seemed united by a fondness for large, mostly unarticulated areas of bold color and an isolated subject, often looking right at the camera or just off camera, although a series entitled Arrangement in Green and Black: Portrait of the Photographer's Mother is a set of 21 plays on Whistler's famous portrait of his mother, all imitating that work by using the photographer's mother seated sideways to the picture plane against a plain background (pale green and black in this case) with a painting hanging on the wall behind. The subject is flamboyantly dressed, the attire very different from the drab colors Whistler's mother wears. The paintings on the wall are likewise a sharp departure from the grey and palest beige of the print on the wall in Whistler's painting, yet each of Smithson's hand-colered images is anchored by the strength of Whistler's simple composition. 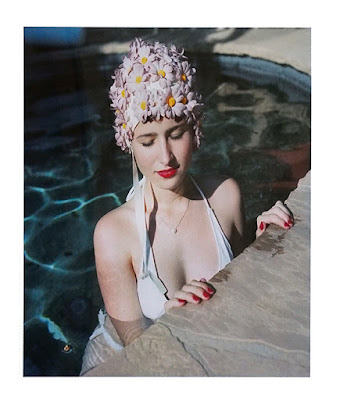 Selections from the series Hollywood at Home included one of my favorite pieces in the show Red Nails and Daisies (left). In this series, Smithson, who grew up in Hollwood, has posed models in allusion to the staged photos of Hollywood stars in their homes that were popular in the 1940s and 1950s. In her blurb about the series, Smithson says "In a reality-TV society where celebrity and stardom is possible without talent or reason, the idea that anyone can become a star has indeed become a reality." The song "Hooray for Hollywood" comes to mind. Although my reproduction here fails to capture the subtlety of the lavender of the plastic flowers in the bathing cap, it should give some sense of how well Smithson has captured the color of the photography of the period. 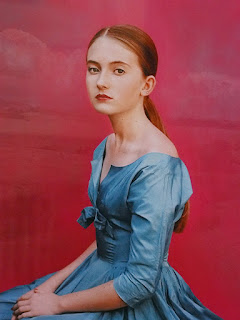 Most of the photos in the show, however, are from a series called Revisiting Beauty, portraits of young women between the age of 14 and 17 "on the cusp of womanhood and not  fully aware of their own loveliness," as Smithson puts it (a detail of one image is shown at left). Each of the young women is photographed against a strongly colored backdrop enhanced with landscape images from California or China, although these landscape elements are so subtly integrated that it's easy to miss them altogether. There are allusions here to the entire history of formal portraiture, particularly painted portraiture. Beside the beauty of the women themselves, the most striking element in Revisiting Beauty is the use of color. There is an alluring simplicity and directness of color that goes very well with the simple dignity of the sitters and a not-quite-acknowledged hint of their sexual appeal. According to the wall tags, Smithson sees her portraiture as collaborative and her portrait series taken together as a kind of autobiography. Well worth a look. Self and Others runs through February 29, 2016.

The next show at Rayko Photo Center will be The Ninth Annual Plastic Camera Show, opening March 9 and running through April 29. Opening reception on the first day of the show, March 9, 2016.

Posted by Colin Talcroft at 12:02 PM No comments: