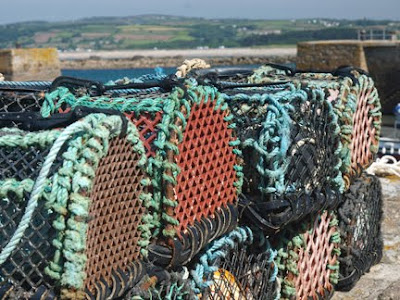 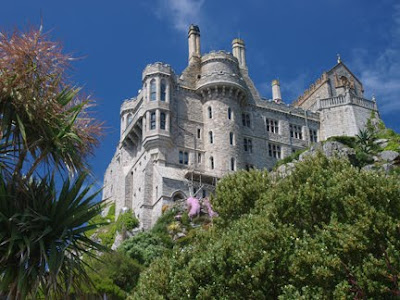 Yesterday I visited St. Michael's Mount, a short walk at low tide across the bay from Marazion. The castle is of some interest, but the place interested me mostly for its view of the coast all around and its very pretty gardens. I can see that the nursery trade is truly international today. Nearly everything growing in the gardens is available at our local nurseries in California--plants from all over the world. Many European goldfinches and a noisy wren were singing in the trees. Barn swallows everywhere. Jackdaws everywhere as well. 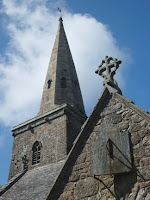 Later visited the village of St. Hilary, a bit further up the coast, after a good lunch at the Mount Haven Hotel, which has a wonderful terrace that overlooks the bay and St. Michael's Mount. St. Hilary has a pretty church with a spire, which I'm told is rather unusual in Cornwall. According to my research, many of my ancestors were married at this church. There was no one there to ask about records, but a small sign noted that they are kept elsewhere, at the County Record Office, Truro, TR1 3AY. The graveyard around the church had many gravestones with family names on them. There is a nice sundial over the church door. Earlier in the day I walked around the graveyard at the Quaker meeting house in Marazion, which also had headstones with family names. 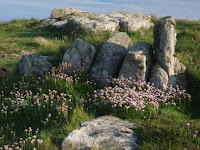 Finally went to Land's End, which is built up with commercial trash that is best ignored. Beyond the trashy tourist traps is a spectacular coast with beautiful walks. The rocks are covered with amazing lichens. Many wildflowers were in bloom, including drifts of sea thrift. Mostly herring gulls and jackdaws in the air, but saw a small kestrel-like bird hunting, a puffin-like bird (razorbill?), and cormorants or shags on the rocks, but they were too far away to identify with any confidence. 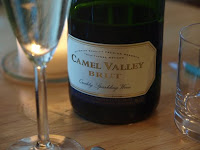 Dinner at Ben's Cornish Kitchen in Marazion was so good last night that we ate there again. The chef--Ben, presumably--is gifted. Everything was wonderful. I chose an English sparkling wine with some skepticism, but it turned out to be very good. We had a bottle of the Camel Valley Brut. It smelled of Granny Smith apples and fresh bread dough. For some reason, I thought specifically of potato rolls. Very dry and crisp but with creamy undertones. Very fine, persistent bubbles. Everything a good sparkling wine should be. Excellent. Today, St. Ives and then heading toward Lyme Regis.
Posted by Colin Talcroft at 12:08 AM No comments:

On the road (Europe 2010): Radioactive Bellybuttons 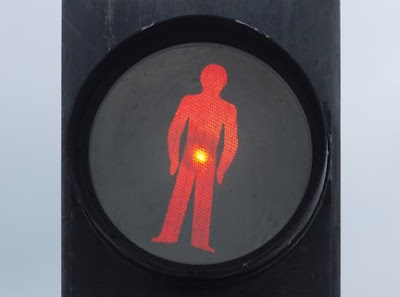 I see warnings all over the towns here to beware of men with radioactive bellybuttons. I'm being very careful....
Posted by Colin Talcroft at 12:17 AM No comments:

Finally feeling a bit rested. Now ensconced in a nice little hotel (The Marazion Hotel--ask for room 10). With our own house in the US rented out and car rentals here sorted out, I'm finally beginning to relax. Marazion is the town that most of my ancestors are from on one side of my mother's family. I had no idea that they had lived in such a pretty place. The town is one of the oldest in Britain, according to a stone monument I saw last night, having been recognized by royal charter in 1257. The church and other buildings on St. Michael's Mount trace their origins to a monastery of the 9th century, although the castle there today is from a later period.

The town overlooks Mount's Bay at the foot of St. Michael's Mount, accessible by foot when the tides are low enough to reveal a serpentine path of stonework. Today will be a day of exploring the island and the town itself. The sun is out this morning, a great improvement from the overcast and drizzle of yesterday.

Wonderful meal last night a short walk from the hotel at Ben's Cornish Kitchen. I had an appetizer of local mackerel with an olive and sun-dried tomato salsa on garlic toast and a main dish of pork prepared three ways--pork belly, loin of pork, and a pork sausage with an apple compote and Calvados sauce. Yummy. Other selections had a wonderful watercress-mayonnaise-mustard sauce. Delicious. Highly recommended if you find yourself in the area. 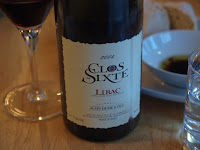 I saw my first authentic English (well, cornish) chaffinch last night. A very pretty bird.
Posted by Colin Talcroft at 12:02 AM No comments:

On the road (Europe 2010): Brighton to Cornwall

Because of difficulties getting a reliable internet connection, I've been slow to post trip updates. I would have thought public wireless connections as easily available in the UK as they are in the US, but it seems that's not the case. 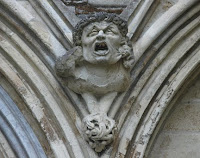 Following two days in Eastbourne and Brighton with my friend Jonathan, we've moved on to Cornwall, via Salisbury and Taunton. We took a quick look at Salisbury Cathedral from the outside, as it was closed. Later we got stuck at a horrible hotel and even worse restaurant there, which is a shame, as I have fond memories of Taunton, the town I stayed in as a child over two summers in 1966 and 1967.  I had to work late into the night, despite fatigue and jet lag, which was no help at all. After eating a decent lunch today, I'm finally beginning to feel somewhat refreshed. We drove late in the day on the 10th from Taunton to Marazion, in Cornwall.

I enjoyed seeing Brighton Pavillion, in Brighton. It's an oddly artificial-looking building that seems like a movie set from the outside, but it's fairly spectacular inside. It's so over the top that its fascinating. It's remarkable that so many Chinese elements were integrated into a design developed by people that had never seen China--although it sounds like the royal family had access to many artifacts from China. 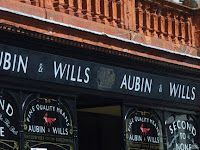 We walked around the town of Brighton a bit, too. I think Eastbourne is actually more attractive than its more famous neighbor. Still, there were some interesting shops. 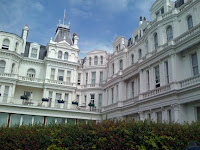 We spent a night at the Grand Hotel in Eastbourne, where we enjoyed a good meal at the Mirabelle restaurant and a bottle of the 2003 Yon-Figeac, which was marked by very attractive scents of plums, roses, caramel, and sandalwood. Churchill stayed here. Claude Debussy composed La Mer here. 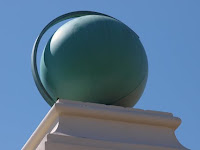 On the way out of Eastbourne we passed through the town of Peacehaven. It is here that the prime meridian leaves the English coast and enters the sea. There is a marker that is poorly marked, but we finally tracked it down. It has a wonderful bronze plaque on it from the 1930s that shows distances from the prime meridian in terms of miles and degrees azimuth that is remarkable for the way it completely ignores any of the world's great cities that are not part of the British Empire of the time. It shows Melbourne, Ottowa, Aden, Calcutta, Rangoon, Singapore, and Hong Kong, but not Paris, Berlin, Vienna, Moscow, New York, or San Francisco.
Posted by Colin Talcroft at 4:09 PM No comments:

On the Road (Europe 2010): San Francisco to London--Eastbourne 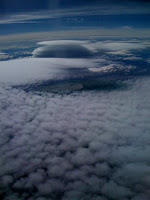 Arrived safely and not a bad flight either, although, as usual, I was forced to spend much of the time in the dark (by a rather nasty flight attendant). I would rather have had the window open to enjoy the passing scenery, even if only clouds. I saw some spectacular clouds not long after leaving San Francisco—stacked lens-shaped clouds four or five deep. I’ve never seen any quite like them before.  Part of the tedium of the dark flight was relieved by a long conversation with a San Francisco woman I met, a photographer. We talked about many things. I watched one movie (Up in the Air), which I thought only so-so, although the line about the George Clooney character being a “parenthesis” was a good one. 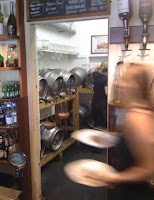 Met Jonathan at the airport. We were in Eastbourne by early afternoon, via Brighton. I really enjoyed a walk at Beachy Head and Birling Gap. The cliffs of chalk are part of the same formation as at Dover. Here narrow bands of brownish black flint interrupt the white chalk. 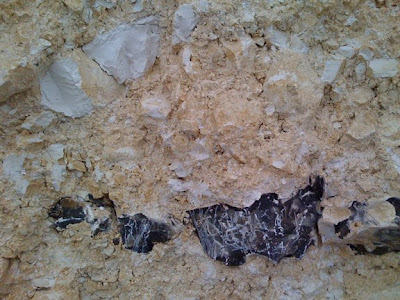 The rapidly eroding cliffs leave a litter of both on the beach. Some are soft lumps of chalk that quickly dissolve into the ocean. What remains are worn nodules of flint, many beautifully shaped and colored. I picked up one that could easily pass as a maquette for a Henry Moore sculpture. I hear Henry Moore spent time here, along with many other artists and writers. Was he inspired?Another chunk of flint reminded me of Ben Nicholson, some reminded me of the paintings of Morandi. Beautiful. Art is truly all around us.

While driving, I got a peculiar satisfaction from seeing starlings and house sparrows where they belong, in Europe. I also saw wood pigeons and some sort of kite flying through the trees. Birdsong everywhere. Jet lag particularly bad this time.

Posted by Colin Talcroft at 10:49 PM No comments: