We got another 0.45 inches of rain last night and this morning. The sun is out now. The plants look green, healthy, swollen with water, ready to burst into bloom, the way they do each spring. We are still well below normal, but the upcoming summer looks increasingly less likely to be dire. More rain is predicted for the coming week. Our 2011-2012 total now stands at 23.10 inches. Still, that's 8.8 inches below average. 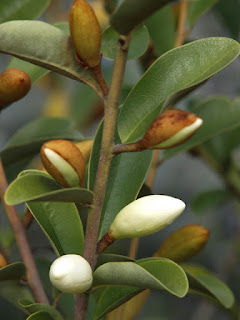 Another belated post about flowers that have come into bloom in the garden in the past few days. The Michelia yunnanensis (a small tree related to the magnolias) on the side of the house started to bloom on March 29. This took a while to get established, but it's now doing very well and looking quite robust (photo). Michelia yunnanensis first bloomed last year on the same date, on March 22 in 2010, and on April 1 in 2009, calculating years of 365 days, 372 days, and 356 days. Also on March 29, the first of the Pacific irises in the garden bloomed. As usual--just a single flower ahead of the others. The plant won't really get going for a little while. The iris bloomed on April 6 in 2011 and April 5 in 2010, calculating years of 357 days and 366 days.
Posted by Colin Talcroft at 10:16 AM No comments:

More rain last night and the night before. We got a total of 1.35 inches of new precipitation. That brings the 2010-2011 rainy season total to 22.65 inches. That's better than it looked like we were going to get, but still decidedly on the low side. The average annual rainfall for Santa Rosa is 31.91 inches, so we are at present 9.25 inches below normal. As most of our rainfall comes between October and the end of March, we're unlikely to get a lot more, but rain remains in the forecast for the rest of the week.We'll see.
Posted by Colin Talcroft at 8:47 AM No comments: 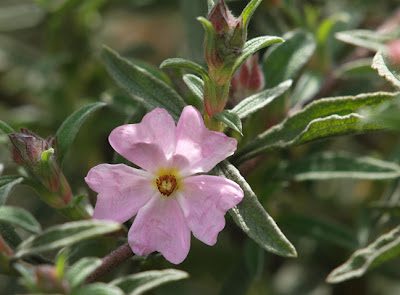 A number of plants have come into bloom in the garden in the past few days. First blooms on the 25th on Lithodora diffusa, a ground cover with deep green leaves resembling rosemary but with bright blue, star-shaped flowers. First blooms also on the 25th on the Bosc pear tree in the garden. Yesterday, March 26 saw the first open blooms on the deep pink crabapple on the side of the house and on one of the pink rock rose bushes (photo above)--which has only a single early flower; the main bloom probably won't come for some time still, particularly given the rainy weather we've been having, but it's a start.
Posted by Colin Talcroft at 7:00 PM No comments:

It's just come to my attention that Antoni Tapies died recently, on February 6, 2012--the day before my own father's death. I imagine I was distracted, but I don't remember hearing any news about the death of Tapies--although I don't watch TV and it was probably not considered news, at least not in the US anyway. I've always enjoyed his heavily textured, cryptic-yet-suggestive, messy-yet-beautiful work. He had a knack for creating arresting images that always looked like they'd been happened upon by accident. RIP.
Posted by Colin Talcroft at 10:34 AM No comments: