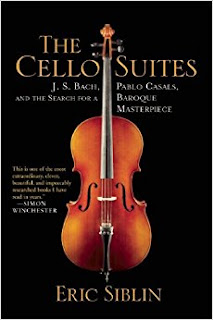 Eric Siblin's The Cello Suites: J.S. Bach, Pablo Casals, and the Search for a Baroque Masterpiece (Grove Press, 2009) was a birthday gift some years back. I should have picked it up sooner. It was a very entertaining read. As the title suggests, it's a look at what today are among Bach's most famous compositions, the suites for cello, through the lens of Pablo Casals's relationship with the music (he was their early champion in modern times) and through the author's research into that relationship and into the history of the original manuscript of the suites (which remains lost).

Despite their fame today, the suites were largely forgotten not too long after Bach wrote them, and when they were played, they were usually considered exercises rather than music to be performed on stage.

Much of the book is biography, sketching out details of the lives of J.S. Bach and Pablo Casals (the book looks at how a young Pablo Casals brought the cello suites new attention; Casals was largely responsible for establishing them as concert pieces)—but much is about the music itself, the chapters and the book laid out out in a pattern that mimics the structure of the suites. It's a bit frustrating that you can't hear the music as it's being discussed. This book could be very nicely adapted to the screen, becoming a mini-series with an episode devoted to each of the suites, the music in the soundtrack. Well written, well researched, and engagingly written. Highly recommended.

Posted by Colin Talcroft at 2:22 PM No comments:

Rain: A Little More Rain in a Record Year

The 2016-2017 rain year ends on September 30, but we rarely get rain in June, July, or August, so, by the end of May, the annual rainfall total usually is pretty clear. This year has been unusual. We got more rain than ever before recorded in Santa Rosa since record-keeping began in the 1880s, and today we got 0.3 inches of rain in the first week of June—not unheard of, but unusual. It started late last night and it's been misting pretty much all day. That brings our total at my location in Santa Rosa to 55.30 inches and the first rain since April 19.
Posted by Colin Talcroft at 6:04 PM No comments: 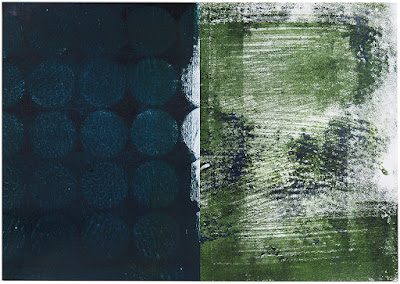 I co-taught a class with Suzanne Jacquot at the Marin Museum of Contemporary Art back in April. My role was mostly showing how I make the monoprints that become raw material for my abstract collages. This is the second of four collages I made from monoprints that came out of demonstrating for the class. Suzanne had brought a pile of cardboard sheets with circular cutouts and these made interesting prints. All four of the collages from Novato use images made using the cutouts.

Click on the image for a larger view. For more, visit my collage website at: http://ctalcroft.wix.com/collage-site/
Posted by Colin Talcroft at 4:42 PM No comments: