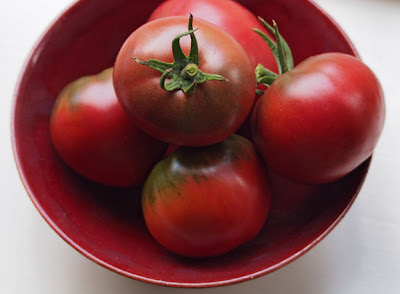 We planted about eight tomato vines this year. Two of them were supposed to be the Green Zebra variety, an heirloom that has done comparatively well in the garden before. Both plants were mislabeled, however. The tomatoes we're now getting from these vines (pictured) are definitely not Green Zebras. I don't know what they are, but they are tasty and attractive, so I can't complain. Despite cool weather, our tomatoes have done very well this year. These are the best I've grown since living in Ohio many years ago--a place where any fool can grow good backyard tomatoes. I've always believed tomatoes are harder to grow here because of our cool nights, but this season has made nonsense of that idea. More important seems to be fresh soil, a lot of good, organic fertilizer, and attentive watering, although the shallow soil in our new beds carved out of former lawn have not allowed deep watering and we've had a fair number with blossom-end rot, a condition I'd read about before but never actually seen. Interestingly, the rot, when it occurs, is very localized. It's easily cut out, leaving usable fruit behind.
Posted by Colin Talcroft at 8:25 AM No comments: 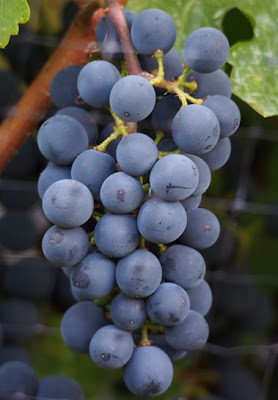 Yesterday I got out the refractometer for the first time this year--out of curiosity; we are still several weeks from a normal harvest date--but a random berry I tested from one of our Cabernet vines was at 20 brix. I normally aim to harvest at around 24 brix. As generally it takes about a week of good weather to raise the brix level by one degree, that would suggest we're about a month from harvest. As we usually harvest in the first week of October, everything seems to be on track, despite the rather cool summer we've had. Looking at the grapes, I noticed some that were beginning to shrivel a little. I'd watered only once so far this year. Given the cool weather, I was trying to see if we could go entirely without supplemental water this year, but I decided it would be best to water once before harvest. I turned on the irrigation system for five and a half hours.
Posted by Colin Talcroft at 8:16 AM No comments: