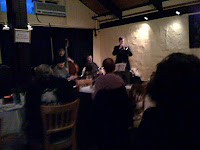 Great jazz in Sonoma tonight. I went to hear the Larry Vuckovich Quartet in a show at the Plaza Bistro in Sonoma sponsored by the Sonoma Valley Jazz Society. It's amazing the caliber of musicians this group seems to get. This was as good as any live jazz I've ever heard anywhere. Larry Vuckovich on keyboards, Erik Jekabson on trumpet and flugelhorn, Peter Barshay on bass, and Bill Moody on drums. Good food and a wonderfully crisp bottle of 2009 Rochioli Sauvignon Blanc that smelled of passion fruit and tasted like coconuts--reminiscent of wines I've tasted from Rias Baixas in Spain. Excellent all around.
Posted by Colin Talcroft at 10:51 PM No comments: 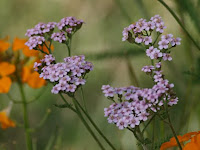 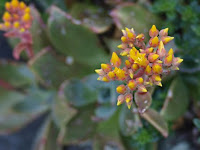 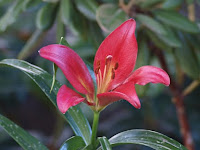 First blooms yesterday and today on a number of plants in the garden. Yesterday, May 20, saw the first blooms of 2010 on two native yarrows--one white, the other pink (top two photos)--, on Dudleya cymosa, a succulent that's common in rock crevices along the coast in this part of California, and of one of the Oriental lilies.

The Dudleya doesn't look like much. It's the sort of plant most people wouldn't even notice, but I'm proud of the flowers on this one. It requires nearly perfect drainage and it's hard to keep going. This one has bloomed for about four years now. The leaves are a bit battered because of the hail we had a few weeks back, but there is fresh new growth as well.

First blooms today, May 21, on the Cuphea under the "Ray Hartman" Ceanothus on the side of the house. This plant dies back to the ground in the winter, but always comes back. In a warmer climate, it would bloom all year 'round, I suspect.
Posted by Colin Talcroft at 10:17 PM No comments:

Tonight I attended one of the always-interesting tastings at the Wine Spectrum Shop and Bar in old downtown Santa Rosa, just off of Railroad Square (707 636-1064)--one of the best wine shops in the area. Pahlmeyer was the featured winery. I tasted five wines. Tasting notes follow.

2007 Pahlmeyer Sonoma Coast Chardonnay: Very pale in the glass. Light oak on the nose, vague hints of pineapple, and a touch of pear blossom. A little caramel, too. Overall, though, not very open. Has presence on the palate, but mostly a sweet, not-very-subtle fruitiness suggestive of caramel and pineapples. Quite long, but low in acid, which made it seem rather flat. Not at all my style. The winery representative I spoke with very briefly said they poured them comparatively warm on purpose, but I find it hard to imagine this wouldn't have been more attractive more thoroughly chilled.

2007 Pahlmeyer Napa Valley Chardonnay: Slightly deeper in color than the Sonoma wine. Peachy on the nose. Light, oaky scents again. Pineapple, but more restrained than in the above wine. Not very forthcoming at all, despite the comparatively warm temperature. Some floral scents not present in the Sonoma wine, a bit perfumey. I had to go outside to be sure I wasn't smelling the perfume or cologne of one of the patrons, but the floral quality appeared to be in the wine. Tarter and more subtle than the Sonoma wine, but mostly had a simple sweetness without much nuance. Moderately long. Some apricots on the finish. Nothing wrong with this wine (and I preferred it to the Sonoma Coast Chardonnay), but not a very interesting wine either.

2005 Pahlmeyer "Jayson" Napa Valley Red: This is a blend of Merlot (73%), Cabernet Sauvignon (19%), Cabernet Franc (6%), Petit Verdot (1.5%), and Malbec (0.5%)--in other words, a Bordeaux-style blend. A fairly full-looking medium red that looks neither young nor old. Scents of currants and boysenberries and black raspberries. Very Zinfandel-like on the nose. Tasted blind, I would have called this a Zin just from the nose. Medium body. Moderate tannins. Moderate length. A trifle rough overall. Something spicy and woody on the finish. Again, tasted blind, I would have called this a decent, if not great, Zinfandel. Not at all unpleasant--probably my favorite wine of the evening--but this left me cold.

2006 Pahlmeyer Napa Valley Merlot: A medium red not showing much age but this does not look like a young wine either. Perfumy scents on the nose--scents I associate with women's make-up, but overall quite closed. Sweet on the palate. Good tannin. Much more grip than the above wine. Nicely balanced with fruit and acidity. Of only moderate length. Seems quite closed. Young. Will need time, but seems to lack distinction already. I may be wrong, but I find it hard to imagine this improving that much--aside from softening. Seems a trifle thin, even. 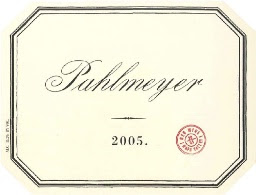 If the sheet provided is correct, Robert Parker has given many of these wines high points and the prices asked range from $39 to $99 a bottle. I don't understand what he was thinking. I found the entire flight rather disappointing. It's hard to imagine the wines were poorly stored or in any way compromised as these came directly from the winery. The winemaker, Erin Green, was present and presumably tasted the wines. I can only think that they were as they were intended to be. There's no accounting for taste, as they say, but I expect to be really excited when someone asks me to pay $100 for a bottle of wine (the Proprietary Red). I found no excitement tonight--which is no reflection on the Wine Spectrum. This is doubly puzzling, though, as I have good memories of Pahlmeyer wines from the mid-1990s. I fully acknowledge that a brief tasting of this sort is not the ideal way to taste wine. Having said that, based on what I had tonight, I'd say the emperor is naked.
Posted by Colin Talcroft at 9:17 PM No comments: 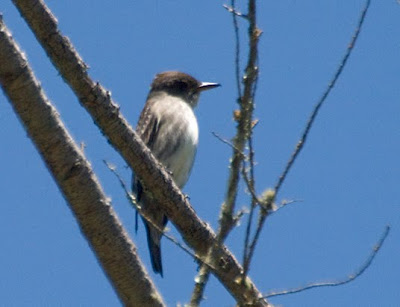 I went for a walk up at Sugarloaf Ridge State Park again today. I've been trying to see lazuli buntings and Western tanagers, and both are supposed to be present there. I saw the bunting--two in fact--a very pretty bird with a turqouise head. I failed to see any tanagers. I got some good close-up views of a pileated woodpecker, however, which more than made up for the lack of a tanager.

I finally identified an olive-sided flycatcher in the field. I've been seeing these around the past week or two, mostly high up in trees and often backlit, making an identification difficult. I kept trying to convince myself they were Western kingbirds, but could never see any yellow, and the shape wasn't quite right. Besides the lack of yellow on the belly, this bird has a shorter, darker tail and the grayish (rather than olive, it seems to me) streaking on the sides of the breast is distinctive (photograph). 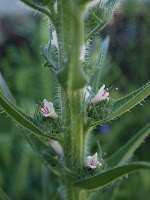 First blooms of 2010 today on Echium boissieri--one of the lesser-known Echiums. This one has comparatively inconspicuous (for an Echium) pink blossoms on tall spikes that emerge from second-year rosettes of leaves. A bumbleebee favorite around here. This plant bloomed in 2009 on May 18. Thus, a year according to Echium boissieri was 363 days. All the plants in the garden now (about 15 of them) are volunteers from seed.
Posted by Colin Talcroft at 10:38 PM No comments:

Rain again. By the morning of the 18th we had had another 0.70 inches, bringing the 2009-2010 total to 32.30 inches here in Santa Rosa--more than an inch above the historical average of 31.01 inches (and some locations have had several inches more than us). The rain this year has made maintaining the garden a breeze. A few roses have suffered from blackspot because of the wetness and the big Euphorbias have a rust on them, but generally it's been a good thing. Everything is lush and green. In 2009, the rain stopped in March. Most of the plants were already struggling at this time last year. The downside is that I'll have to spray the grapes with sulfur all over again--probably on Thursday morning, as more rain is predicted for wednesday.
Posted by Colin Talcroft at 4:08 PM No comments: 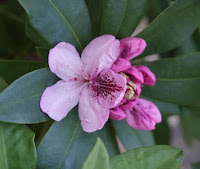 First blooms today (May 17) on the large, smelly,  furry-leaved Salvia under the pear tree. I'm afraid I've lost track of the species name of that one....
Posted by Colin Talcroft at 4:08 PM No comments: