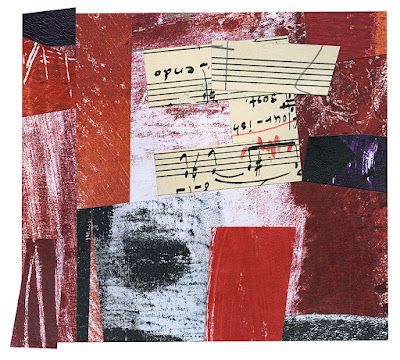 My most recent collage. A small piece that once again includes a bit of hand-written music from a stack of old music given me by fellow collage artist Sherry Parker. The music has a seductive charm of its own, but here I've used it purely as an abstract design element.

For more of my collage (and other) work, visit my website at http://ctalcroft.wixsite.com/collage-site.
Posted by Colin Talcroft at 1:37 PM No comments:

I've read a number books about the development of the atomic bomb and a detailed biography of Robert Oppenheimer. These books focused on bomb development efforts in the US, only touching lightly on German efforts to build an atomic bomb during WWII. Heisenberg's War (Knopf, 1993) looks at German progress toward a nuclear device in detail by examining what Werner Heisenberg was up to during the lead-up to the war and during the conflict and what the allies thought he was up to.

During the war, Heisenberg was regarded by the allies and his peers as the most important scientist in Germany. If anyone could build a bomb for Hitler, it would be Heisenberg, and fear of Hitler with an atomic bomb was the primary motivation behind the Manhattan Project, the concerted US effort to beat Hitler to the punch, at least at the outset. It was unclear, however, whether Germany was attempting to create a bomb. A great deal of intelligence gathering was aimed at trying to piece together a picture of German bomb plans. That uncertainty was a spur in the flank of the allied bomb builders. Signs coming out of Germany were ambiguous. Clearly the Germans were interested in heavy water, but, oddly, German scientific journals following the discovery of fission (not long before the start of the war) continued to publish routine articles about nuclear theory as if it was of no immediate importance except as a potential source of energy. The US enforced a moratorium on articles about nuclear research of any kind; the government did not want to arouse suspicion that it was interested in the subject, nor did it wish to give away any useful information. But routine public activity among German scientists might have been part of a deception....

As for theory, there was disagreement among scientists around the world about the nature of the nuclear chain reaction we now know is required to produce an explosion and about how much fissile material would be required to sustain such a reaction and a detonation. If tons of uranium would be required, it would be impossible to make a bomb small enough to transport by air to any target destination (early on there was talk about exploding a large bomb on a boat in an enemy port). In the early days, there was disagreement about whether such a reaction was possible at all, although scientists in the US (many who had fled Europe) were fairly quick to understand that a bomb was possible and what it would require to build a bomb--either enriched uranium or plutonium.

Natural uranium consists of two isotopes, Uranium 235 and Uranium 238. The heavier isotope, U-238, predominates. If my understanding is correct, U-238 absorbs neutrons to the extent that it hinders the chain reaction while U-235 does less so. Therefore, a bomb can be made with a much smaller amount of U-235. With an enriched mix of the two isotopes (more U-235 than in a natural sample), critical mass, it was understood, would be about the size of a pineapple and even smaller using pure U-235. The problem is that separating the two isotopes is a slow, expensive process. Many physicists at the time concluded that a bomb would take many years to develop because of the time required to separate enough U-235 to do the job. Meanwhile some physicists surmised that certain reactor designs could be used to produce plutonium, an element that had been discovered only recently. Plutonium is much easier to produce in quantity than enriched uranium. It was a U-235 bomb the US dropped on Hiroshima, but the Trinity test detonation was a plutonium bomb, as was the bomb dropped on Nagasaki. That is, ultimately the Manhattan project succeeded in enriching uranium, in producing plutonium, and in developing explosive nuclear device designs that worked both with enriched uranium and plutonium, but, as history has shown, it was a massive effort involving more than 130,000 workers, multiple production sites, and the equivalent of about US$23 billion in today's money.

Despite worry in the US about Hitler acquiring a bomb before the allies, German scientists appear to have believed the idea was impractical (essentially that it would have required far more money than was likely to be available) and that it would be impossible to build an atomic bomb quickly enough to win the war with such a device. They also clung much longer to the idea that tons of fissile material would be required. Scientists in Germany did understand that it might have been done if there had been a will to do it (as the allies proved), yet they never asked for funding or much other support from Hitler's government. Author Thomas Powers suggests persuasively that that was a reflection of moral compunction. Few German nuclear physicists wanted a weapon of mass destruction at the disposal of a man like Hitler. More pointedly, Powers suggests Heisenberg deliberately exaggerated the difficulties of making a bomb and never let on that he understood the physics as well as he did, giving the lasting impression of relative German incompetence. When asked, Heisenberg repeatedly said critical mass would be a ton or two of fissile material long after he appears to have understood that was not true. Heisenberg attracted suspicion and mistrust in the scientific community worldwide because he decided to remain in Germany after most others had fled the country and Nazi-occupied Europe. He remained in Germany throughout the war. There was much speculation then and later about his loyalties, but he appears to have been fiercely loyal to Germany rather than to the Nazi Party.

The book does not read like an apology. It seems even-handed. It appears to be well researched and meticulously documented. Its arguments are compelling. The book is interesting for the broad sweep of history it presents as much for the intimate details it offers of allied monitoring of German bomb development, often drawn from primary sources. Recommended, although Heisenberg's War may offer a little too much detail for a reader only casually interested in its subject matter, a problem compounded by the fact that it becomes clear fairly early in the narrative that the Germans had no hope of making a bomb before the end of the war, in large part because no one in Germany was trying very hard.
Posted by Colin Talcroft at 9:53 PM No comments:

A good storm yesterday and today left us with 1.15 inches of new rain, bringing our total so far in the 2017-2018 rain year to 14.65 inches. Normal for March 13 in Santa Rosa is going on 30 inches, however, which means we are way behind where we should be. Rain is forecast for tomorrow again. The more, the better.

[Update: Rain again since last reporting has brought the total as of today, March 18, to 16.40 inches.]

Posted by Colin Talcroft at 4:35 PM No comments: