The day before yesterday I spent most of the day in San Francisco. After taking a walk on Ocean Beach and having a grotesque and virtually inedible bowl of oatmeal at a little café down by the water (the coffee was fine; the oatmeal looked and tasted like it had been made the week before and then freshly microwaved--don't people know what good oatmeal should taste like?), I drove over to see the De Young Museum for the first time in a year or so. I mostly saw the regular collection, choosing not to spend the extra money to see the JeanPaul Gaulthier exhibit now going on. It was funny (and a pleasure), though, to see that many people in the museum seemed to be rather better dressed than usual. 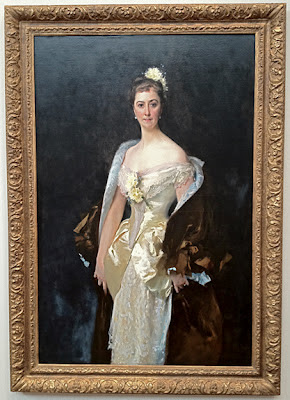 There is a good Sargent in the De Young, an 1884 portrait of Caroline de Bassano, Marquise d'Espeuilles. Sargent depicts fabrics with a skill that's breathtaking. A few seemingly random strokes conjure up textures so real that you can almost hear the cloth rustle as the subject moves ever so slightly (the figure is static yet animated). The strokes of paint in the dress are abstract and painterly, yet, if you step back a little, they suddenly lose their substance and become part of an ethereal whole. The dress worn by this Caroline de Bassano is an excellent example of Sargent's ability to paint fabrics that seem alive. My photograph of the painting here can't do it justice.

Painting faces, Sargent captures the flesh but also the personality. I have no doubt that Caroline de Bassano looked just as Sargent has painted her (not very flatteringly--with her very large eyes, receding chin, and thin upper lip)--but he's also captured her personality--or so it seems. She looks ambitious and superficially confident, but somehow extremely insecure at the same time. She seems deeply in need of something. A pleasure to see this painting again. 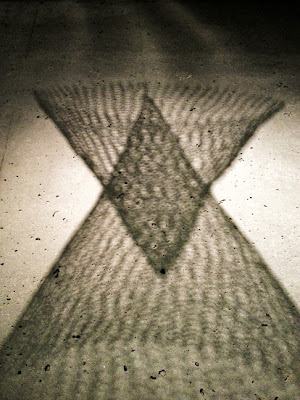 Most interesting, however, was a set of sculptures by Ruth Asawa tucked away in a back corner. I would have missed them entirely if I hadn't decided to climb the tower at the museum. "Climb" is a misnomer. I was disappointed to find there is no access by steps (although, in the event of a fire, there must be, during normal conditions the stairway is reserved for staff use, as this area houses administrative offices). Reluctantly, I went up by elevator. The tower gives a surprisingly good view of the surroundings. It's well worth the detour--even without the sculptures in the elevator hall. These are wire constructions that cast shadows as interesting as the sculptures themselves. I must confess that I enjoyed the shadows as much or more than the wire pieces--although it goes without saying, perhaps, that the two are inseparable. In any case, the sculptures are well worth seeking out.
Posted by Colin Talcroft at 10:34 PM No comments: 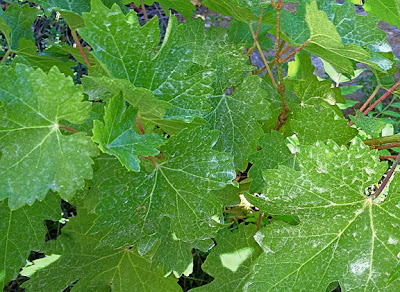 I sprayed the grapes with sulfur again today, to prevent mold--the third time I've sprayed this year. This is a little late, but I wanted to wait until after the vines had finished flowering and set fruit before wetting them. As we've had comparatively cool weather and there has been a good breeze most days, mold didn't seem to great a danger. Also, I've just trimmed back the canopy to make sure the vines aren't being shaded by excess growth at the top. Having said that, I've learned over the years that it really is necessary to spray. If you don't, the grapes mold and much fruit is lost. So far, everything looks good. The next hurdle will be getting the nets in place before the fruit begins to take on color and the animals start to take an interest. I'm determined to get the nets on early this year.
Posted by Colin Talcroft at 6:56 PM No comments: