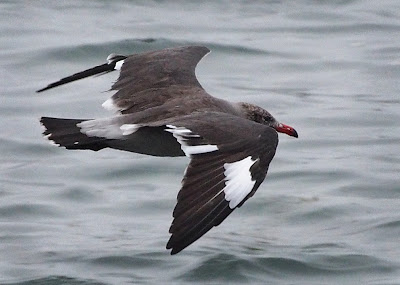 On a recent pelagic birding trip I got to see many of the local birds that stay mostly far out to sea--birds that we rarely get to see on or from dry land. In particular, there was an unusually large number of Storm-petrels (four species--Ashy, Black, Wilson's and Fork-tailed Storm-petrel). Four birds were new to me--Cassin's Auklet, Rhinoceros Auklet, South Polar Skua, and Sabine's Gull, bringing my life list to 416--a small number, but not bad for only about four years of serious birding and birding done mostly in one area.

There have been a number of Blue-footed Boobies in the San Francisco Bay area this autumn, including around Bodega Bay, the area we set out from. We saw nothing so rare as a booby, but we did get to see an unusual variant of the Heermann's Gull, which is a fairly common visitor in Sonoma County during autumn migration and over the winter months. A few of these birds have a white patch in the wings that is not normally present and that I'd never seen before. I've heard various estimates of the frequency with which the variation occurs, ranging from one in a hundred to one in a thousand. I don't know, but I thought this bird very interesting. This particular individual has white in the secondaries, not just in the upper primary coverts, which is where the white normally occurs in birds that show this variation. Happily, the water was comparatively calm on this (my second) pelagic tour. On the first one, the water was so rough that many on the boat were sick the whole time, including me.

For more about bird watching in Sonoma County, see my website Sonoma County Bird Watching Spots
Posted by Colin Talcroft at 8:10 AM No comments: 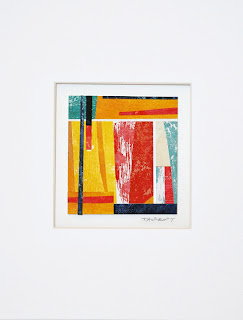 I'm continuing to have fun making collages. I've finished ten small pieces now in as many weeks--not that quantity is important. When I finish a piece, I like to mat it and hang it on the wall a while. I like to look at it to see if it's really finished. Often some little detail will begin to bother me or some corner of the work will start asking me for a little more attention. After a while, I'll decide that a spot of color here or a line there will truly complete the piece. And then I can move on. 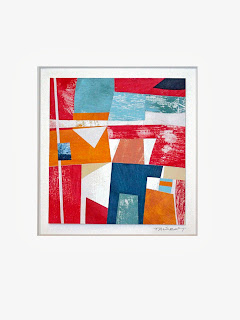 Once in a while, something that seems finished begins to look all wrong. Inevitably, I take it down and destroy it or I paint over it. The nice thing about collage is that destruction can be generative of new things. One of the first collages I made, the largest of them, began to look wrong after a few weeks. Usually I have an inkling that something is wrong from the beginning when something is wrong, but sometimes I'm initially quite happy with what I've done. I took this particular collage down and cut it to pieces, and from the pieces made three new, smaller collages that I like better--the three pictured here. The original collage is at the bottom of this post. Can you see where the new works came from?

Posted by Colin Talcroft at 7:41 AM No comments: 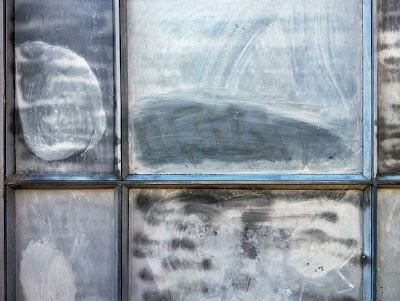 While walking in downtown Santa Rosa recently (near the corner of Humboldt St. and Fifth St.) I found a building with several windows obscured from within with whitewash or something similar. I liked this divided panel of grey windows. Looked like art to me.

For more unintended art, see my blog Serendipitous Art.
Posted by Colin Talcroft at 7:30 AM No comments: