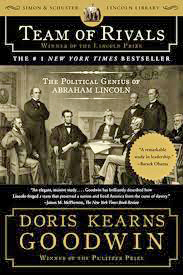 I've just finished reading Team of Rivals, by Doris Kearns Goodwin (Simon & Schuster, 2005). I bought it several years ago, but got around to reading it only this week. Having recently read Bruce Catton's Civil War trilogy, it seemed an appropriate book to move on to.

Goodwin's book is a simultaneous biography of Lincoln and the leading men in his cabinet of 1860--with an emphasis on Seward, Chase, and Stanton. The rich narrative illuminates Lincoln's genius in handling subordinates, the clarity of his vision, and his ability to rise above the pettiness and devotion to self-interest that so often clouds the judgement of lesser men. Although the events of the Civil War are an essential backdrop, here the spotlights play on the personalities of Lincoln and those who worked for--and against--him and on the interactions of these people rather than on the progress of the war itself.

Lincoln seems almost superhuman. At every turn, his good sense, his ability to read moods and motivations, his empathy and compassion, his vast capacity for magnanimity, and his superlative timing are on display. Seward and Stanton shine brightly, Chase less so (although he did his job well, and Lincoln remained loyal to him for that reason). We get revealing sketches of many other players, including the wives and children of these men, along with Frederick Douglass, Horace Greeley, Thurlow Weed, Lincoln's secretaries John Nicolay and John Hay, and Lincoln's top generals. Goodwin confirms the impression I've had from other reading of General McClellan as a self-absorbed whiner capable of doing nothing with alacrity except assign the blame for his failings to other people. On the whole, though, what is astonishing is the high level of competence and integrity of the people running the United States during Lincoln's administration. I was struck particularly by the eloquence of these people. The quotes from letters, memos, speeches, and diaries Goodwin liberally uses are almost invariably a pleasure to read for the sheer beauty of the language employed. I found myself longing to live in an America governed by such brilliant people. Why do we have so few politicians of this caliber today?

Kudos to Simon & Schuster. It's rare these days--even at the best of publishers--to come across a book like this one, completely without printing or editing errors. Goodwin's writing, meanwhile, is fluid and lucid to the point of seeming almost transparent. The 754 pages of text slide down the mental gullet like oysters riding on Champagne. Pure intellectual pleasure. One of the best books I've read in a long time. Highly recommended.
Posted by Colin Talcroft at 11:52 PM