Miscellaneous: Should We Celebrate the Death of Osama Bin Laden? 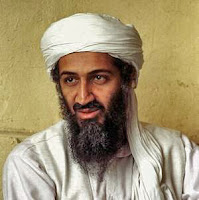 The streets of Santa Rosa appear quiet today--at least in my neighborhood--and last night I heard no jubilation following the President's announcement of the killing of Osama Bin Laden. I have no regular TV service (by choice), so I am spared the constant spillage of images and commentary from the televised media, but stories on the Internet news services make it clear enough that some are celebrating today, that some Americans are photographing themselves with news bulletins in front of the White House, that some are chanting USA!--that some are literally dancing in the streets. What I have seen reminds me of images from Tehran in 1979 that showed crowds of young Iranians celebrating the capture and holding of hostages from the US Embassy there. I see the same lack of dignity.
Time has posted online a 20-page article originally published on September 14, 2001, the magazine's first extended reaction to the events of September 11, 2001. Reading it today brought back the sense of disbelief and then outrage 9/11 created, the sense that an important line had been crossed. Should we be glad that Osama Bin Laden is no longer free to spout invective, abet malice, spur violence? Yes. Was killing him just? Given there is little doubt that he planned the African embassy bombings (which killed many non-American muslims), the USS Cole incident, and 9/11, I would say yes. Should we be dancing in the streets, waving flags, chanting USA!? I think not. Images of Americans celebrating the death of Osama Bin Laden will not aid efforts to suppress terrorism. Osama Bin Laden will become a martyr to those who supported him, whether we celebrate or not, but in the minds of those that oppose US Middle East policy, images of celebration will be slotted alongside images of prisoners at Guantanamo Bay and Abu Ghraib. Ultimately, jubilation--at least such vulgar expressions of it--will not serve us well. More importantly, celebration of the killing of a man, any man, seems barbaric to me. Isn't barbarism among the things we pretend to fight against?