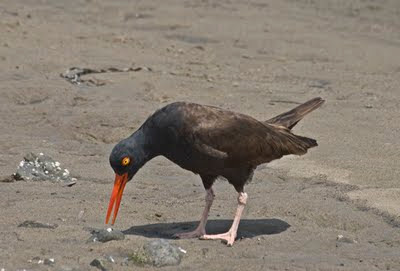 I spent most of the day today out looking at birds. I joined a Madrone Audubon Society walk at Willow Creek Rd., north of Bodega Bay and on the way home stopped at Porto Bodega, the north end of Bodega Harbor, and went as far south as Campbell Cove. At Willow Creek, the highlight was watching a Bald Eagle spar with an Osprey over the hills that flank the Russian River as it meets the Pacific. At Bodega, I got some excellent photos of Black Oystercatchers, Western Grebes, and Common Loons.

At Bodega Bay (Porto Bodega), I saw: Black Oystercatcher (two adults and a juvenile, and got to see the adults doing some kind of display, although I can't say what the meaning of it was--heads straight up, beaks open, then heads way down low with a stiff tail sticking up in the rear...), Willet, a single Canada Goose (strange, but true), Western Gull, Double-crested Cormorant, Starling, Surf scoter, Western Grebe, Horned Grebe, Common Loon, House Sparrow, Pigeon. At the north end of the harbor, I saw: Western Grebe, Common Loon, Black Oystercatcher, Double-crested Cormorant, Turkey Vulture, Surf Scoter, and Osprey. 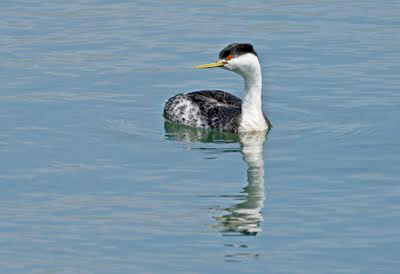