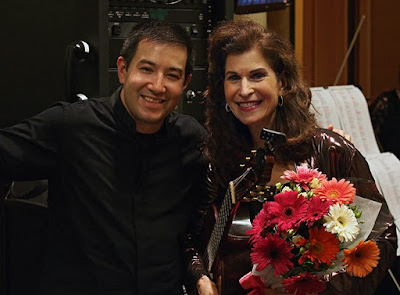 Last week was a busy week on many fronts. Musically speaking, I attended one of the November Santa Rosa Symphony concerts featuring guitarist Sharon Isbin. The following day, I had the privilege of hearing Hilary Hahn in recital at Davies Symphony Hall, in San Francisco. Isbin played the Concerto for Guitar and Orchestra, by Heitor Villa-Lobos. Also on the program were Dances of Galánta, by Kodály, Liszt's Mephisto Waltz No. 1, and Bernstein's Symphonic Dances from Westside Story.

The Santa Rosa Symphony Youth Orchestra joined the main symphony musicians at the end of the concert to play Bernstein's Overture to Candide in an unexpected encore--a piece that was on their tour program in Europe earlier in the season. Isbin, too, played an encore--one of those extremely familiar Spanish guitar pieces that I can't immediately put a name to. 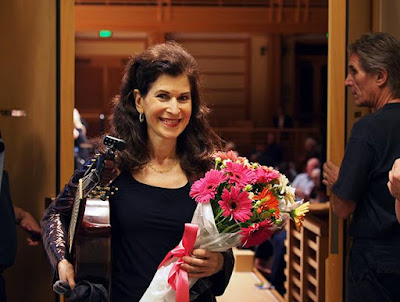 I did backstage photography for the Santa Rosa Symphony again. Isbin tuned before going on stage using an electronic tuner. Just before it was time to go on stage, she turned to conductor Francesco Lecce-Chong and said "I'll take an A from the oboe so I can pretend to tune," which struck me as rather funny.

I have almost no words for the Hilary Hahn performance. She was superb, as always. She played one of the Bach solo sonatas for violin and two of the solo partitas, including Partita No. 2, with the famous extended chaconne. As an encore, she played a movement from another of the sonatas. It was strange to see the Davies Symphony Hall stage entirely empty of chairs, music stands, and instruments except for the lone figure of Hahn who nevertheless commanded the attention of perhaps the biggest crowd I've ever seen there. I counted six empty seats. During the encore, having already left my seat, I was able to watch and listen looking back from one of the doorways into the hall and to see the rapt audience all focused on Hahn, her violin, and the music she was making with it.
Posted by Colin Talcroft at 12:04 PM