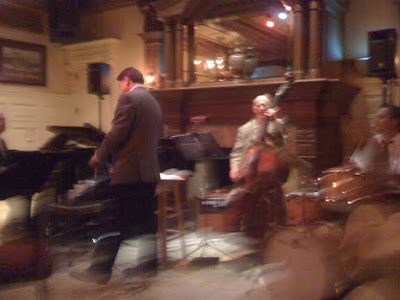 Busy day on Saturday. In the morning I went to the farmer's market at the Veteran's Memorial Building, across from the Sonoma County Fairgrounds. It's always hard to park when the fair is going on, but I'm glad I went. I found some good tomatoes and the fish seller had sea urchins. I picked up a couple. I was looking for other things I did not find.

Later, I went to the annual tasting and reception for the wine club members at Wellington Vineyards. I got a chance to taste some of the 2008 wines from the barrel and to talk with the growers and winemakers, which is always useful. I took along a bottle of our 2008 rosé because Toby and Janice in the tasting room and I had talked about it before. They seemed impressed. At the tasting one of the guys pouring wine mentioned that he was a bartender and would be working at the Ledson Hotel, in Sonoma, that evening and that there would be a good jazz group playing, so I went over there later. 1950s-style jazz with a good singer, a pianist, a bass player, and a drummer. Very enjoyable. I only got the name of the singer--Jonathan Poretz. He seems to appear there once a month with a smaller group. He said he brought in a bigger group last night as a rehearsal for an upcoming performance at Yoshi's in San Francisco. Shared a table with two young ladies from Italy--Federica and Lucrezia--making a tour of California. It was a lot of fun. Unfortunately, I didn't have a proper camera with me, hence the bad photo.
Friday night had a good meal at Greens in San Francisco after seeing the Robert Frank show at the San Francisco Museum of Modern Art. I had wanted to see the Richard Avedon show and also the Ansel Adams/Georgia O'Keefe show, but got there too late in the day. Another day. The Robert Frank material was interesting. It was an unusual opportunity to see vintage prints of the entire selection for The Americans. There was a display of various editions of the book over the years. I noticed that the images looked markedly different. That's inevitable because of the variables introduced by printing, but I was surprised to see that in the most recent edition shown the cropping was quite different from that of the earlier editions. I wonder who made that decision?
Posted by Colin Talcroft at 9:13 AM