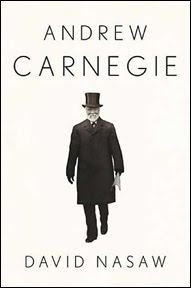 I'm just finishing a colossal (800-page) biography of Andrew Carnegie by David Nasaw (Penguin, 2006). While it would be hard not to know the name Andrew Carnegie, or to consider oneself educated without knowing something about the man--about his great wealth and his philanthropy, particularly his creation of libraries across the United States and in many other countries (when I drove across the country this past summer, one of the things that impressed me was the startling number of Carnegie libraries I happened to see along the way)--I must admit there was a great deal about him I didn't know. I didn't fully understand Carnegie's connection with the Homestead riot, I hadn't been aware of his close association with Frick, whose name I knew mostly in association with the great art museum in New York that houses possibly my favorite portrait of all time (Holbein's 1527 painting of Sir Thomas More), and I hadn't been aware of Carnegie's extraordinary access to a string of American presidents (Harrison, Cleveland, McKinley, Roosevelt, Taft, and Wilson), not to mention an important group of politicians in England.

Likewise, I hadn't know about his efforts to establish such things as international arbitration treaties (with the aim of abolishing war as a means of settling disputes among nations), a precursor to the League of Nations, a world court, and an international police--although his efforts bore little fruit in his lifetime, and, as an older man, his meddling in politics and foreign affairs appear to have annoyed many of the people he was trying to influence. Carnegie seems to have been ahead of his time in these peace-related matters. He failed spectacularly--his efforts were followed immediately by WWI and then by WWII--but they were noble ideas, nevertheless.

Long, but very well written and edited. It never drags. Highly recommended.
Posted by Colin Talcroft at 9:58 AM