Books I'm Reading: How Equal Temperament Ruined Harmony (And Why You Should Care) 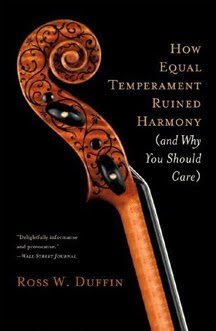 I just finished a slim volume--I needed something short after reading a giant Andrew Carnegie biography-- called How Equal Temperament Ruined Harmony (And Why You Should Care), by Ross W. Duffin (W. W. Norton, 2007). Clear, concise, well written, and well argued, this book sets out to do two things: First, show that equal temperament in many instances simply doesn't sound as good as alternative tuning systems; and second, that "before the standardization of equal temperament became so overwhelming that nobody got to hear anything else when they were growing up, musicians knew about equal temperament and in many cases chose not to use it." Here the author is attempting to refute the notion implicit in much modern thinking about music that equal temperament was an unmitigated improvement that in some sense saved music from chaos (instead of the truth, which is that ET is simply a convenience that accommodates fixed-tone instruments such as the piano when accompanying stringed instruments, for example, and that it has both advantages and disadvantages--the main disadvantage being that it often forces unpleasant-sounding harmonies). He argues convincingly that ET was viewed as a compromise grudgingly accepted by vocalists and string players when they had to accommodate keyboard instruments (which can't differentiate between what are today considered enharmonic notes--such as g-sharp and a-flat--unless specially built with extra keys). I suspect the audience for this book is limited, but a good argument is a good argument, whatever the subject. Very enjoyable. Recommended.

What to read next?
Posted by Colin Talcroft at 7:31 AM

Email ThisBlogThis!Share to TwitterShare to FacebookShare to Pinterest
Labels: Books I'm Reading, Colin Talcroft, How Equal Temperament Ruined Harmony and Why You Should Care