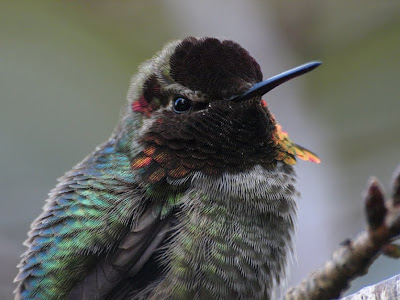 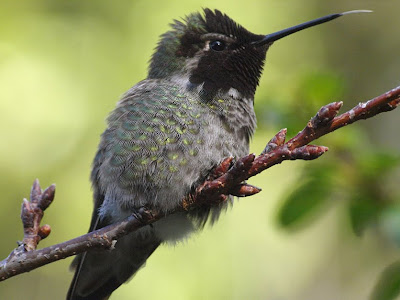 In the city on Saturday morning--San Francsico, that is--I spent some time at Lake Merced and then at Golden Gate Park, mostly in the Strybing Arboretum area. Lake Merced was rather disappointing. I'm sure it's a good place for birds from time to time, but yesterday there were few and none of any special interest--mostly coots. Not that I have anything against coots. Actually, I do. A coot is a particularly hard bird to photograph. That's what I have against coots. They're all black except for their all-white bills. Expose one right and the other is inevitably overexposed or underexposed. But, enough about coots.

At Golden Gate Park, there was similarly nothing out of the ordinary, but I ran into an Anna's Hummingbird that was remarkably tame. It allowed me to approach to well within an arm's length. Although I didn't try to touch it, I could have. I got some good photos of it, a couple of which I've posted here. In the second shot, you can even see its little hummingbird tongue. You can enlarge the photos by clicking them.
Posted by Colin Talcroft at 12:41 PM