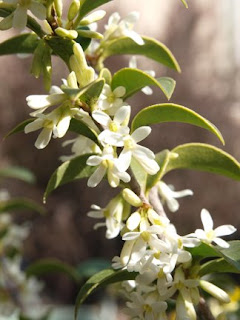 I report belatedly that the pluot "Flavor King" and Osmanthus x burkwoodii both started blooming yesterday. Activity has picked up markedly in the garden in the last couple of days with a lull in the rain and warmer weather. It was in the high 60s again today. The Osmanthus bloomed on February 18 in 2009. So, a year according to this plant was 362 days, or close to a calendar year. The photo here is a view of the plant in full bloom in 2009.

The pluot is a trifle problematic. One or two flowers opened in isolation about two weeks ago, which is typical, but a significant number of buds broke today for the first time. Last year, an isolated flower bloomed on February 5th, but I didn't note the start of the real flowering, so my data from last year and this year don't really mesh. Roughly speaking, however, the timing of both the first flower and of the fuller flowering appear to be in line with last year.
Posted by Colin Talcroft at 10:29 PM