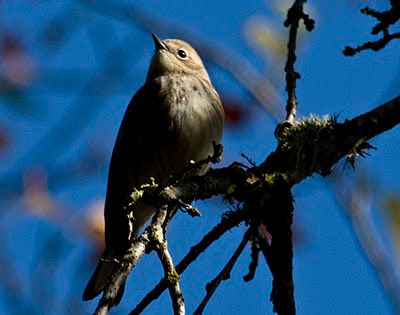 I've done so much bird watching recently--in the past two years. I'm not sure why all of a sudden. Partly it's been because work has been slow; I've had more free time than usual. But that's not the only reason. My parents were occasional bird watchers, and they always pointed out anything interesting that might be flying around when we were traveling or when we visited the Brooklyn Botanical Gardens or Central Park (I lived in Brooklyn until I was seven). Once in a while we made trips specifically to see birds--to places like Greenwich, Connecticut and Jamaica Bay. So, I grew up with a sense that birds were something worth looking at, and these things stick with you.

Not all the associations are pleasant. My father was (and remains) a short-tempered man that was incapable of making concessions to the attention span of a child. The trips at times were excruciating, to tell the truth. My brother and I were always being yelled at for scaring the birds away. We were expected to walk quietly and attentively in a way that we weren't capable of at that age. It was at times frightening to be with my father when he was focused on seeing something and we were in the way. Still, I enjoyed seeing unusual birds even at that age--when everything went right, when we found something worth seeing that my brother and I had managed to keep from scaring away, when my father was in an agreeable mood.

Still, I didn't take much of an interest until years later, in Ohio, during my summers at Glen Helen, in Yellow Springs. Even then, though, I would have been a casual bird watcher at best. But things rub off on a child.

Partly it was the names. I loved the sound of names like "Purple Gallinule" and "Greater Yellowlegs" and "Scarlet Tanager" and "Ruby-crowned Kinglet." What was a tanager? I had no idea, but I loved seeing its flaming red form flitting in the trees in Greenwich--one of the very early sightings I clearly remember. I would have been about six. And then there were the Rand McNally flash cards we played with. I can still see the the red, blue, and yellow box they came in. My parents believed in educational toys, and they were fun--so many fewer things to be distracted by in those days. The names of the birds I could enjoy without having to worry about scaring anything away.

We had a box of bird flash cards and a box of animal cards. Each of the bird cards had a picture on the front with the name of the bird on the back. Again, the names seemed magical. They were mostly exotic birds on the cards that didn't show up in New York City. There was the Roller, a mostly blue European bird (I was thrilled to finally see real Rollers during my two months in France this summer); the Hornbill, with its absurdly big bill; and the Cuckoo, among many others. These birds and birds like the Scarlet Tanager are imprinted in my brain in a peculiarly distinct way. The names even today send me tumbling back in time in a wave of associations that can be momentarily disorienting.

The birds from Glen Helen form another group with strong associations--the Eastern Wood Pewee in particular, for reasons that are obscure to me--again, I think I just liked the name. These were birds pointed out on hikes through the woods with camp friends. I don't know how much I was paying attention, but it was around that time that I began to get a sense of the great diversity of birds, and that's probably what I find most interesting today. It's freshly astonishing to me every time I go out to be able to see 40 or sometimes 50 or 60 distinct species in a single day of walking in the woods or at the ocean's edge, little more than half an hour from home.

And so I have begun to look for birds in the past couple of years, as if remembering a forgotten habit, as if I've been doing it regularly in all the intervening years. This morning I took a walk from Hoen Ave. to Summerfield Rd., along Sierra Creek, the creek that runs alongside Strawberry School Park. It was comparatively quiet, but I saw 26 species in the course of about an hour. Many Western bluebirds were around, attracted by ripe berries (they looked like hawthorne berries to me) and there were quite a few yellow-rumped warblers as well (photo).

For more information about bird watching in Sonoma County, see my Website Sonoma County Birding Spots
Posted by Colin Talcroft at 11:49 AM