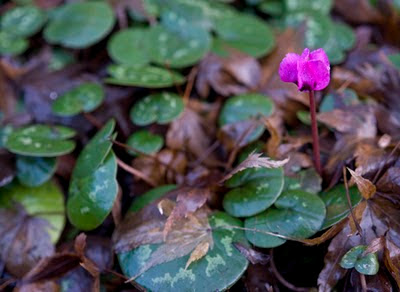 Although it's still 2010, I count this as the first blossom of 2011 in the yard because this plant usually blooms in the first week of January, and little else will be coming into bloom any time soon, except for candytuft. This tiny little cyclamen has done wonderfully. I planted two or three a few years ago and there is now a thick mat of leaves about two feet square. The plant appears to spread both by underground roots and by seed.