First blooms yesterday on some of the species tulips in the garden--the Tulipa bakeri in front of the house. These are the survivors of about 300 I planted about four years ago. One summer the squirrels discovered them and ate most of the bulbs. Those that remain are very pretty. Species tulips, unlike the familiar florist's tulips are not hybrids. It is from these species tulips that what most people think of as tulips today were developed. Tulips are native to places like Turkey and the countries of the Caucasus region. This is a variety called "Lilac Wonder." Tulipa bakeri bloomed in the garden on March 5 in 2009 and on Februray 24 in 2010, calculating years of 356 days and 383 days, which average to 369.5 days. 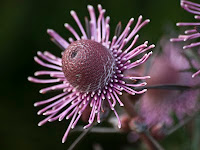 I count yesterday also as the first day of blooms on Isopogon formosus, a strange Australian flower that has done rather well here. I never know exactly when to judge it has bloomed. The petals are like filaments. The flowers open slowly and last a long time, both on the plant or cut. Isopogon formosus bloomed on March 26 in 2009 and on March 22 in 2010, calculating years of 361 days and 357 days, which average to 359 days.

The day before, March 13, the first flowers opened on the Bosc pear on the garage side of the house. It's raining again today. I wonder if the tree will set fruit? Last year we had none, presumably because of the strange, cold summer. We'll see. The Bosc pear bloomed on March 26 in 2009 and on March 22 in 2010, calculating years of 361 days and 356 days, which average to 358.5 days. All three of these plants have bloomed more irregularly than most.
Posted by Colin Talcroft at 8:34 AM