I attended a very enjoyable concert by the San Francisco Symphony on Friday night (April 9). Osmo Vänskä, Music Director of the Minnesota Orchestra, conducted. San Francisco Symphony concertmaster Alexander Barantschik was the featured soloist, playing the Mendelssohn Violin Concerto in E Minor. The program opened with a new composition by Austrian composer Thomas Larcher entitled Red and Green. The second half of the program, after intermission, was taken up by a performance of Ralph Vaughn Williams' London Symphony. 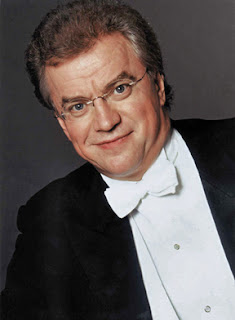 Some people hate it, but I have a taste for modern music, and I particularly enjoy explorations of rhythm, texture, and timbre--including those that use unconventional instruments, non-instruments made into instruments, and extended techniques on traditional instruments. It's the sound of the music that fascinates me. Is that nonsensical? A better way to put it might be to say, it's the quality of the sound that I enjoy. Larcher's Red and Green was right up my alley. As the program notes point out, Larcher has more or less abandoned melody and harmony in this piece. Red and Green is concerned with rhythm, texture, and timbre--the quality of sound. The program notes obligingly list all the unusual "instruments" in the ensemble. I won't repeat it here, but it includes things like tin foil. The six-man percussion team (not including a couple more performers manipulating a piano and playing a celesta) was kept very busy. In the one place that a semblance of a melody did emerge, it had the feeling of something external--a snippet of some other composition fleetingly recalled. Trying to describe music like this--or any music, really--in words is a hopeless task (that's what we have music for). Suffice it to say that it was consistently interesting and I very much look forward to the release of a recording that includes Red and Green.

The piece was completed only in November of last year, as a commission for the San Francisco Symphony. The Thursday, Friday, and Saturday concerts this past weekend premiered the piece. Composer Larcher--a strikingly tall, awkward-looking man--appeared on stage after the performance and seemed very pleased--as he should have been. The orchestra was extraordinarily focused and responsive to Vänskä, who conducted without a baton, using his entire body to communicate--bending low with a cramped hand at his chest asking for more, or making broad gestures with his arms, or pointing energetically in anticipation of an entry. The San Francisco Symphony seemed in top form. Mr. Larcher may have been awkward on stage, and his comments about the music in the program notes didn't quite make sense, but who needs words when you can create music like this? Larcher is a composer I will be looking out for in the future. 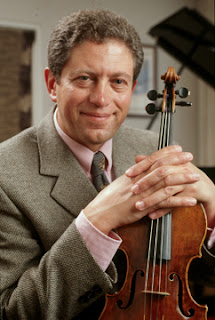 The Mendelssohn Violin Concerto got off to a very rocky start, I thought. Was it just me? For the first few bars, Barantschik sounded out of synch with the orchestra. It was a short while before soloist and orchestra seemed to be conscious of each other's presence. I got the impression that conductor Vänskä started before Mr. Barantschik was quite ready. The playing overall was rather too deliberate for my taste. Competent, surely, but somehow lacking in fire. I thought the early cadenza and the slow middle movement the most effective parts of the performance. The orchestra didn't have the concentration so evident in the opening piece. Do performers go on auto-pilot when they play something as familiar as this concerto? Still, it was fun to learn that Mr. Barantschik played the violin on which the Mendelssohn concerto is believed to have been premiered by Ferdinand David, in March 1845, a 1742 Guarnerius del Gesu on loan exclusively to Mr. Barantschik from the Fine Arts Museums of San Francisco and that Jascha Heifetz had owned the violin from 1922 until his death, when he bequeathed it to the Fine Arts Museums. I probably own Heifetz recordings of this instrument.

I thought Vänskä led the symphony in a generally good reading of the London Symphony by Vaughn Williams, another very familiar composition, but one I'd never heard live before. By the end of this very long piece, however, the audience was getting restless. Still, all in all a very enjoyable evening.