Yesterday I tried two wines from BearBoat. I can't say I enjoyed either wine--a 2008 Alexander Valley Sauvignon Blanc and a 2007 Central Coast Riesling. The Sauvignon Blanc was thin and virtually tasteless. The Riesling was somewhat better, but not at all nuanced. Both wines were inexpensive at only $4.99 a bottle, and the BearBoat labels--or is that Bear Boat? (it's hard to tell)--are attractive and whimsical (on the Sauvignon Blanc label we see two bears in a boat musing on the meaning of life; one says he feels his life is adrift, the other, named Zeke, points out that they live on a rowboat...), but I don't think I'd buy either again; whimsy and packaging can't really make up for what's absent from the bottle. Brief tasting notes follow. 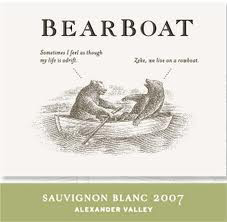 The 2008 Bear Boat Alexander Valley Sauvignon Blanc was a very pale gold. It had a slightly perfumed scent at first--offering something floral--with hints of vanilla, but little else. There was none of the gooseberry that usually identifies Sauvignon Blanc, although there was a vague suggestion of lime. On the palate, the wine was clean, light, and thin, but that's about all I can say for it.  It was virtually tasteless. There was no concentration at all. Not unpleasant, and there were even a few attractive hints of green melon, but, overall, I'd call this wine simply bland. Not recommended. (The 2007 label is shown here, but it's more or less identical to the 2008 label). 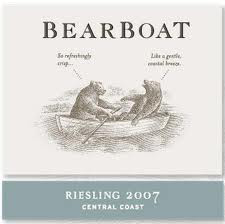 The 2007 Bear Boat Central Coast Riesling was a more interesting wine. If I had to choose between the two I'd take the Riesling simply because it had some flavor, but ultimately, this too, was rather dull. It was a medium gold color. It had the typical "petroleum" scent of Riesling with a hint of honey and later a suggestion of dried apricots, and on the palate it suggested candied grapefruit rind--which is a reasonably interesting to thing to suggest--, but the wine was one-dimensional and a little bit cloying. Not recommended (except perhaps well-chilled as a cheap summer barbecue aperitif for the undiscerning).

I write about many subjects. Use the labels at right above to explore this blog. For more wine reviews, use the Wines I'm Drinking label.
Posted by Colin Talcroft at 10:50 PM