Art I'm Looking At: Romare Bearden at The Museum of the African Diaspora 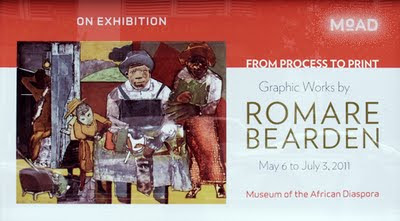 Romare Bearden is an artist I've been aware of and liked since the 1970s. I don't remember where I first saw his work, but I was immediately drawn to it, particularly the collages, for which he remains best known. I suspect it was not seeing an original in a museum or gallery that first made we aware of Bearden (although it may have been) but rather seeing a reproduction--possibly an illustration in an article, and likely not one about Bearden himself. Bearden's pictures tell stories; and because of that, they are particularly good as illustrations. We have too many opportunities to see them reproduced as embellishments tacked on to other stories, it seems to me, and too few to see the originals standing on their own. This show is notable for bringing together many originals in one place and also for showing less well known work. The Romare Bearden show "From Process to Print: Graphic Works by Romare Bearden," which runs through July 3 at the Museum of the African Diaspora (685 Mission St., San Francisco, around the corner from SF MOMA (415) 358-7200), focuses on Bearden's printmaking.

As a printmaker myself, I enjoyed seeing the wide range of techniques on view and the emphasis on how Bearden used the printmaking process to explore. There are monotypes, etchings, drypoints, etchings with aquatint, lithographs, silkscreen prints, and collagraphs here, along with some of the plates from which the prints were made. Having used many of these techniques myself (all except lithography), I had no trouble understanding the explanatory panels, but they were in places a bit unclear, and in one instance mistaken (with "intaglio" used where "relief print" would have been correct). The images, however, speak for themselves. They range from work of the early 1960s to work made nearer the artist's death, in 1988. In a few instances, Bearden has exploited the inherent qualities of the technique--for example, in etchings using only the fine lines that etching excels at capturing. Ultimately, however, Bearden appears to have been most comfortable with the synthetic approach of collage. Many of the prints are, in fact, experiments with methods for translating collage into a printed form, and many have had collage elements added after the fact. It's not surprising either that collography appealed to Bearden. A collagraph is essentially a print made from a plate that is itself a collage. To be able to see the master collage artist thinking through the possibilities of the various forms of printmaking is fascinating. Recommended.
Posted by Colin Talcroft at 11:25 AM