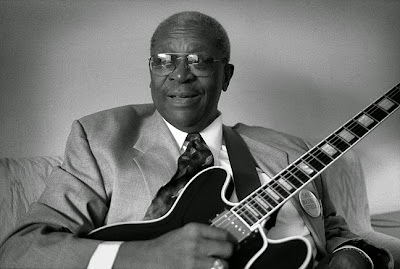 It was in November of 1997 that B. B. King released his 35th studio album Deuces Wild, a collection of duets with the likes of Van Morrison, Eric Clapton, Bonnie Raitt, Dionne Warwick, The Rolling Stones, Joe Cocker, and Willie Nelson. Tokyo-based blues writer Allan Murphy, a friend, had been given a one-hour interview slot with Mr. King while the musician and his band were on tour in the city just after Deuces Wild had been released. At that time, Allan had been helping my brother, Ian Talcroft, and me produce And This Is Maxwell St., a three-CD set containing music recorded for the soundtrack of Mike Shea's 1964 film And This Is Free. I went along to the interview as the photographer.

Mr. King impressed me immediately as a soft-spoken, intelligent, thoughtful, and gentlemanly man. He was dressed in a suit, wearing glasses, and carrying one of his guitars--guitars that were always named "Lucille." He set the guitar aside as we began to talk. The interview started with the usual courtesies and questions about Deuces Wild, but quickly ranged widely with much talk about Mr. King's early career and what it had been like growing up in the south in the early part of the 20th century. It finished with some talk about the Maxwell St. Market area in Chicago--the subject of Shea's film. We got Mr. King to wear a "Save Maxwell Street" button for us (at the time, the old market area was slated for redevelopment). At the very end of the talk, I asked if he'd stand up with the guitar for me so I could get a few photographs. He politely asked if it would be all right to do the photos sitting with the guitar--as he was "getting old." One of my shots is shown above.

Allan mentioned while preparing to leave that his second daughter had been born that morning and that he'd be rushing off to the hospital to join his wife and the new baby. Hearing that, Mr. King quietly removed his wallet, pulled out a crisp $100 bill, and picked up a black marker that had been sitting on the table in front of us. He signed the bill "B. B. King" and then added "For the little one" and the date (February 28, 1998). He handed the bill to Allan as a souvenir.

Allan's daughter's middle name is Lucille. One classy man. It was a privilege to have spent an hour with him. RIP.
Posted by Colin Talcroft at 7:01 PM