Art I'm Looking At: Degas and Friends in Petaluma 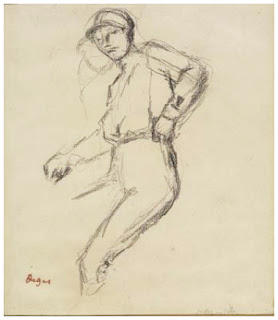 It was with some skepticism that I recently visited the Petaluma Arts Center to see Edgar Degas: The Private Impressionist, Works on Paper by the Artist and his Circle, on view there through July 26, 2015. An important Degas show? In Petaluma? Before my visit, I couldn't help feeling there'd probably be one or two good pieces to look at and then much of inferior quality padding out the gallery spaces.

I was wrong. Quite the opposite is true. There's almost too much to look at comfortably here, and the art on display is of a high caliber, with only a handful of exceptions (the pieces by Ingres and Toulouse-Lautrec, for example, are disappointing).

The works in Degas: The Private Impressionist are all from the collection of Robert Flynn Johnson, Curator Emeritus of the Achenbach Foundation for Graphic Arts at the Fine Arts Museums of San Francisco. The exhibit was curated by Mr. Johnson and Louise Siddons Ph.D., Assistant Professor and Curator of Collections at Oklahoma State University, Stillwater.  Each piece is accompanied by an unusually long explanatory label. Reading these is time consuming, but you'll want to read them. I recommend allowing two-three hours to give the show its due.

The Petaluma Degas show is worth seeing for a number of reasons. First, it's notable for its breadth. It includes more than 100 pieces, about 40 by Degas himself. The latter include very early drawings, some of which are copies made in the Louvre and other museums, often with one sketch overlapping another. Several sheets have drawings on both sides of the paper (mounted here so that front and back are visible)--images Degas made for practice rather than as finished works. Thus, the early part of the show gives us an unusual glimpse of Degas learning to draw. 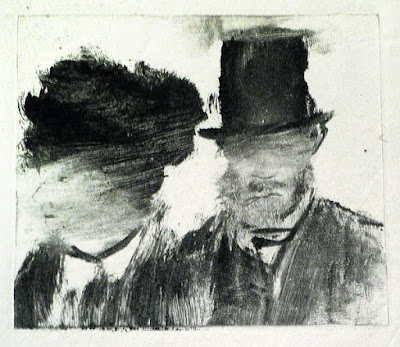 Second, the show includes work by Degas in less common media. There are several early monotypes (one-off prints made by drawing with ink or paint on a hard surface--usually glass--and then transferring the image to a sheet of paper). Reproduced here is Heads of a Man and Woman (circa 1877-1878), notable for its combination of spontaneous execution and acute observation. There are etchings and drypoints, many of which are interesting for being late impressions from cancelled plates.  There are prints made in collaboration with publishers that reproduce some of Degas' pastels and paintings as lithographs. There are photographs by Degas.  In a combination of photography and printmaking, Degas in a couple of examples has worked on used Daguerreotype plates to make aquatints. Again, the breadth of the selections is impressive. It attests to Mr. Flynn's expansive taste and explains the show's subtitle referring to the "private Degas": Degas himself publicly showed work other than paintings and pastels only very rarely. 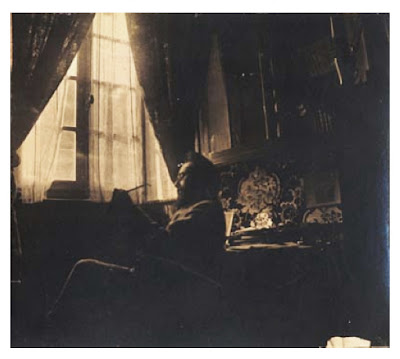 If you're interested in the history of photography, the show is worth seeing just for the eight photographs included (two of these show composers Debussy and Chausson). While Degas' interest in photography is well known and it's easy to see how photography influenced his cropping of compositions in other media, I don't remember ever having seen photographs made by Degas himself--although he was an avid photographer, at least for a short period of apparent obsession with the medium. It seems there ought to be more of his photographs around. Apparently, there aren't. So, this is a rare treat. One of the wall labels on the photographs is rather funny, describing Degas breaking up a dinner party by bringing out his camera and coercively posing reluctant guests in fastidiously composed scenes that then required long exposures.

Third, the show puts Degas clearly into the context of his artistic milieu by including so many works by and of artists that Degas knew and himself collected. Not all of these people will be well known to a general audience, but they include Tissot, Fantin-Latour, Moreau, Gérome, Desboutin, Aryton, and Jeanniot, among others. Better known names include Cassat, Ingres, Cézanne, and Toulouse-Lautrec. Also included are some modern takes on Degas and his work, including a very funny drawing of Degas from 1964 that David Levine made for The New York Review of Books that poses Degas in a tutu standing in the ballet dancer's fourth position, alluding to the artist's sculptures of young dancers. 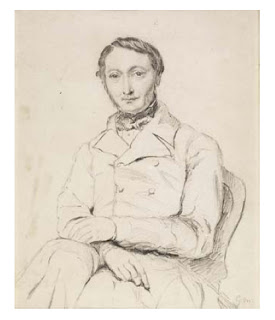 Some of the highlights of the show among the Degas works include: the lovely portrait of Mademoiselle Dembrowska used on the cover of the catalog and in the show's advertising (circa 1858-1859); a beautiful pencil drawing of a plough horse from 1860-1861; several prints executed in 1934 by Maurice Potin using photogravure, aquatint, and etching to reproduce monotypes of brothel scenes Degas made between 1878 and 1880 but never exhibited; and the above-mentioned monotypes and photographs. Among the work by other artists, there is an intriguing Portrait of a Working Girl (circa 1880) by Annie Aryton (shown below)--which, as the label points out, depicts a woman who looks remarkably like the girl who modeled for a couple of the dancer sculptures Degas made; A bold drypoint self-portrait by Marcellin Desboutin (circa 1875); a portrait of Degas as an older man by Pierre-Georges Jeanniot;  a very fine red chalk drawing entitled Portrait of an Officer (1853) by Jean-Léon Gérome--an uncharacteristic subject for an artist best known for his paintings of mythological subjects; the circa 1854 Portrait of a Man (pictured above) by Gustave Moreau, a graphite drawing that looks more like an Ingres than the small Ingres head on display; a pair of small self-portraits by Jeanniot; and, among my favorites in the show, a circa 1870 graphite drawing by Adolph von Menzel of his sister asleep in a railway carriage (bottom). Fans of the sitcom Seinfeld may find it amusing that one piece in the show is on a piece of paper watermarked "Vandelay." 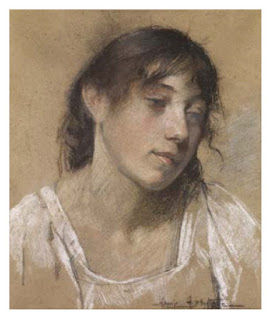 If I had to nitpick, I was disappointed that no photography is allowed in the galleries, which is frustrating, as it makes it very difficult to later talk about individual works without relying on sometimes-faulty memory, and the catalog is available only as an expensive hardcover edition I didn't feel I could afford. It appears to reproduce all the wall labels verbatim, so it will make an excellent resource, but I had to pass. I noticed that while the drawings and prints are generally well reproduced, the Degas photographs have been given an odd orange tinge not present in the originals on display, which is a shame. Otherwise, I can recommend Edgar Degas: The Private Impressionist wholeheartedly--but make sure you allow plenty of time to take in the full sweep of this remarkable collection. General admission is $10 (free for Petaluma Arts Center members). Thursday through Monday (closed Tuesday and Wednesday) 11AM to 5PM. Open on Saturdays until 8PM. (All photographs from the online catalog.) 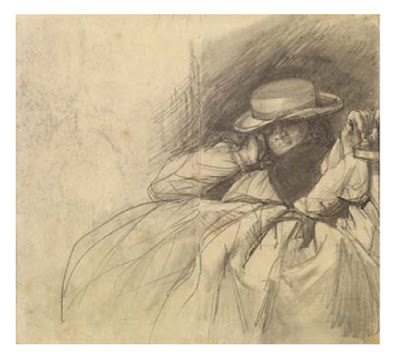 Posted by Colin Talcroft at 3:33 PM