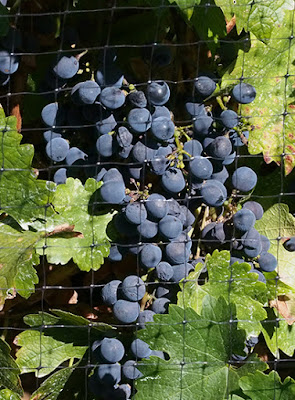 I picked our grapes this year on September 19, which is about three weeks earlier than usual (although only five days earlier than last year, which was likewise early). Because of the heat and dry conditions, many grapes were already beginning to turn to raisins. Fruit set was also very poor this year--the worst it's ever been. The harvest was tiny. I took in only 18.7kg or 41.4lbs of Cabernet and 12.8kg or 28.2lbs of Sangiovese. We normally harvest anywhere from two to three times that much. The crushed cabernet must measured 26.0 Brix at a pH of 3.62 (pH squared times Brix = 340.7). The crushed Sangiovese must measured 22.0 Brix at a pH of 3.57 (pH squared times Brix = 280.4). I usually aim for a Brix reading of about 25 for the Cabernet and about 23 for the Sangiovese. I lightly sulfited both containers and set them aside in a cool place for a pre-soak.

I inoculated the juice on the morning of the third day, September 22, using the Rockpile yeast for both. Ordinarily, I press the Sangiovese after about 18 hours to make a rosé, but we had so little fruit and because of work conflicts, I had to leave it longer than that, so, by default,  I'm fermenting the Sangiovese as a red wine this year for the first time in many years. I'm trying to decide whether to blend the two varieties. I may have no choice. I ended up with only about three gallons of each, which, when pressed, will reduce to about two gallons each. That would require using four one-gallon containers, which is a pain (no one seems to make two-gallon glass containers suitable for handling wine), so it will be easier to combine them.

[Update: In the end, I decided to leave the two red wines unblended for the time being. As of today (October 6), the wines are resting, awaiting inoculation for malolactic fermentation.]
Posted by Colin Talcroft at 6:54 PM