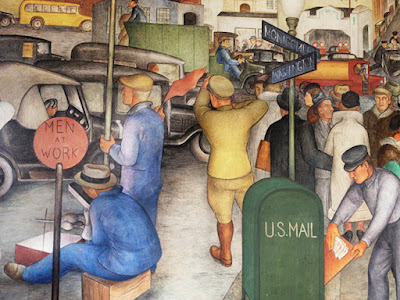 I've lived in the Bay Area for 15 years now. I've been visiting here off and on for more than twice that long, yet I'd never been to San Francisco's Coit Tower until yesterday. I never thought the tower itself especially attractive, although it makes a nice enough punctuation mark in the landscape. I paid the $8 fee to take the elevator to the top, disappointed that you can't walk the stairs (I wonder what the interior looks like?—although I don't imagine it's inspiring for its engineering or architecture like the inside of Brunelleschi's dome in Florence or the like; the tower appears to have been made by simply pouring concrete into forms). The view was attractive out in the direction of Alcatraz and the bridges, but I went to see the murals I'd heard about rather than the tower itself. I didn't see any of the feral parrots said to live on Telegraph Hill, the site of the tower (named for a telegraph station built on the hill in 1850 to alert residents of the arrival of ships in San Francisco Bay. Apparently the station used semaphore). 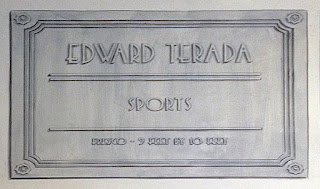 All the interior walls on the first floor of the tower are decorated with murals. In what is now the gift shop, there is an interesting row of painted "plaques" high up on the walls naming the murals and the artist who created each one. Also given are the dimensions of each mural and the technique used to create it. Pictured here is the painted plaque for Edward Terada's Sports, a fresco measuring nine feet by ten feet, we are told. The tower was built in 1933, the mural painting project completed by 1934. Apparently there are more murals in the stairwell, not normally open to the public, except during docent-led tours (see below). The mural project was sponsored by the Public Works of Art Project (PWAP), a New Deal program aimed at supporting artists—artists who in this case included: Maxine Albro, Victor Arnautoff, Jane Berlandina, Ray Bertrand, Ray Boynton, Rinaldo Cuneo, Hebe Daum, Mallette Harold Dean, Edith Hamlin, George Albert Harris, Otis Oldfield, Frederick E. Olmsted Jr., José Moya del Piño, Suzanne Scheuer, Ralph Stackpole, Edward Terada, Clifford Wight, Frede Vidar, and Bernhard Zakheim. PWAP was a WPA precursor. 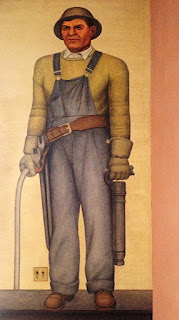 I was aware of some of these artists (notably Otis Oldfield, whose work I've admired in the collection of the Crocker Museum, in Sacramento, Ray Boynton, and Victor Arnautoff), but other names I'd mostly not heard before. Olmsted was a great-nephew of Frederick Law Olmsted, the landscape architect who designed New York City's Central Park. Arnautoff taught art at Stanford, where Richard Diebenkorn was one of his students, and worked widely as a muralist in the Bay Area, often embracing social themes such as class, money, and political power. Ralph Stackpole was the father of photographer Peter Stackpole, noted for his fine photographs of the building of the Oakland Bay Bridge and the Golden Gate Bridge, some of which were shown last year at the De Young Museum (between February 1, 2014 and June 8, 2014) in a show called The Bay Bridge: A Work in Progress, 1933–1936. Ray Boynton's work is in several Bay Area museums, including the De Young and The Legion of Honor. He was a pioneer of the fresco technique in this area. 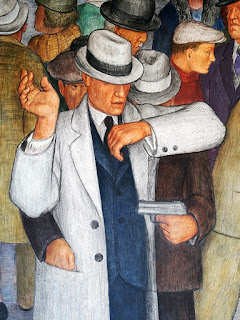 Arnautoff's large fresco City Life is perhaps the highlight, although I enjoyed many of the other works, notably the large figures by Clifford Wight (The Ironworker is shown above). City Life, according to the Wikipedia entry for Arnautoff, caused some controversy because of details that hinted at the artist's left-of-center political views. That article mentions, for example, the artist's exclusion of The San Francisco Chronicle from the newsstand depicted, which is selling left-wing papers instead. The artist's somewhat cynical view of life in the city is apparent in his decision to include both an auto–pedestrian accident (which looks fatal) and an armed mugging (above) among the goings-on. The mugging victim is getting his pocket picked at the same time—perhaps being worked over by a team of thieves. 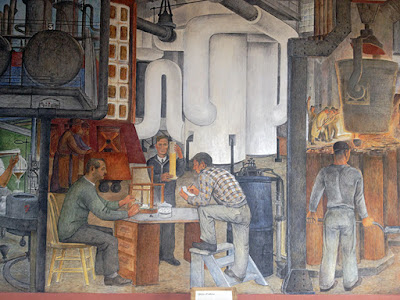 Other murals depict agricultural activities, cultural activities, and the various industries of the Bay Area at the time the murals were made, including steel production, canning, sugar, petroleum, hydroelectric power, and mining. Industries of California, by Ralph Stackpole (1885-1973) focuses on oil, steel, sugar, and canning (above, detail). The descriptive labels in the tower point out that sugar and oil remain important local industries, while steel and canning have disappeared from the Bay Area. 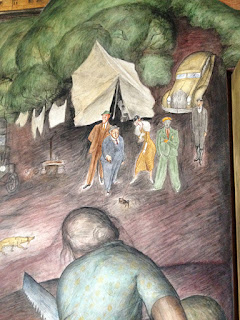 California Industrial Scenes, by John Langley Howard (1902-1999), the artist's only fresco, was interesting for its focus on the mining, oil, and hydroelectric power industries coupled with a concern for the social divide the success of these industries exacerbated. As the mural labels point out, a noteworthy detail is the contrast drawn between a wealthy, chauffeur-driven family and the tent-dwelling family they observe below a hydroelectric dam (above). 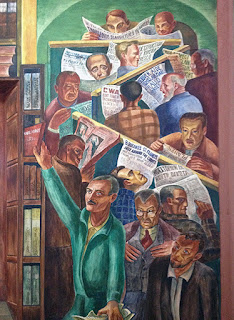 I also liked Bernard B. Zakheim's (1896-1985) Library, among others. According to the onsite labels, Zakheim, along with poet Kenneth Rexroth, and artists Frank Triest, Victor Anautoff, and Ralph Stackpole, helped to create the Artists' and Writers' Union which pressured the government to start federal arts projects. Their efforts "resulted in the Coit Tower mural project becoming the first New Deal project of its kind in the U.S." Zakheim's daughter was a model for one of the figures, and friends and fellow mural project artists are included. Stackpole is shown reading a newspaper article about the destruction of a Diego Rivera mural in New York, sculptor Benny Bufano reads about an upcoming statue project of his own, and artist John Langley Howard is shown reaching for a copy of Marx's Das Kapital; many of the artists held leftist views. 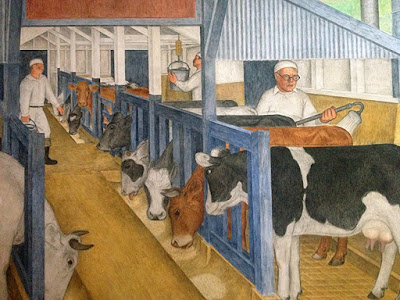 The industrial focus on one side of the building is complemented on the other side by murals that highlight California's agricultural heritage. California Agricultural History (above, detail), by Gordon Langdon (1910-1963), shows farm workers milking cows by hand. A number of the other mural artists were used as models in this image. Lucien Labaudt cleans cows, Fred Olmsted and an assistant, Tom Hayes, give a cow a vaccination, and in a section in a window alcove, John Langley Howard looks at silage, holding a pitchfork. California, by Maxine Albro (1903-1966) is a panoramic view of the state's agriculture activities (below, detail). The mural labels point out that the laborers depicted are all of European descent, the artist having excluded the many Mexicans and Asians who already worked in California's agriculture industry. Crops shown include hay, flowers, oranges, apricots, almonds, and grapes, among others. There is a full winery depiction as well (not shown). This mural was created just after the repeal of Prohibition. It's easy to imagine the artist wishing to acknowledge the long history of winemaking in the state interrupted by passage of the 18th Amendment to the Constitution. 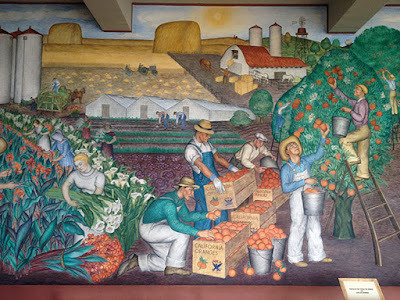 There are a number of interesting panels in the small elevator lobby as well. These appear to be oil paintings rather than frescoes. Artists include Olmsted, Oldfield, Rinaldo Cuneo (1877-1939), and José Moya del Piño (1891-1969). Cuneo's paintings show farmland in what is now the urban landscape of the East Bay. Oldfield's painting shows shipping on the Bay, with a view of Yerba Buena Island before the manmade Treasure Island was added or the Bay Bridge built. Moya del Piño's panel shows the Bay again and the waterfront. It's interesting for the two figures shown, a self-portrait and a portrait of Olmsted doing a sketch of the scene in front of the figures (below, detail). 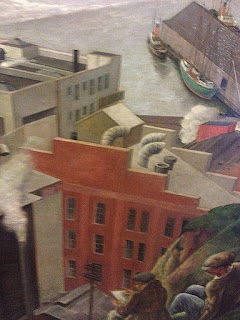 These murals are as arresting as the beautiful, fanciful underwater murals from the same period (completed in 1939) by Hilaire Hiler (1898-1966) at the former oceanside bathhouse at the end of Polk St., now part of the San Francisco Maritime Museum—another government-sponsored, depression-era arts project. Both are well worth a visit. Note that parking is extremely limited at Coit Tower. It's probably best to go in the winter months and on a weekday, if possible. For information about visiting Coit Tower and docent-led tours, visit the official Coit Tower website.

For some perspective on federal spending on the arts during the depression and now, read this Hyperallergic article about a 2014 show of WPA and WPAP art at the Pennsylvania Academy of Fine Arts.
Posted by Colin Talcroft at 6:21 PM