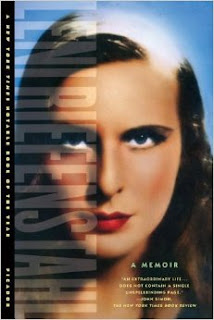 It would be hard to argue that Leni Riefenstahl didn't live a full life. Reading her memoirs is exhausting. She goes full-tilt, without a break, from her earliest days to the last covered in her memoir (published originally in 1987 in German, when she was 85, in English in 1992; I read the Picador edition pictured). She was a dancer, actress, filmmaker, and photographer. In conjunction with these activities, she became a mountain climber, a propagandist, an African adventurer, and a scuba diver. Best known for her film Triumph of the Will, a documentary about the 1934 Nazi Party rally in Nürnberg, and for the two-part film Olympia, a record of the 1936 Berlin Olympics, she will forever be associated with Hitler and The Third Reich--an association that overshadowed the rest of her life, and one she's at pains to play down in these pages.

The earliest sections of the book cover Riefenstahl's debut and rise as a dancer, her transition into acting, and from there into producing and directing films. Many of the pre-war films she starred in had heroic alpine settings that required arduous climbing and filming in perilous conditions, the best known of which was The Blue Light (1932). These early films gained her the reputation that drew interest from the Nazi Party, and Hitler in particular.

While admitting that Hitler was charismatic and that she was drawn to him, she claims she abhorred his racial ideas and that he shut down any conversation about them. She claims she was pressured into making the Nazi Party films—that she tried to avoid making both Triumph of the Will and the earlier Victory of the Faith (a documentary about the 1933 Nazi Party rally, also in Nürnberg, and a virtual template for the later party film). She says her film Day of Freedom: Our Army, about the Wehrmacht, was made solely to assuage the egos of the Wehrmacht leadership (she says scenes of the Wehrmacht's participation in the 1934 rally were shot during bad weather and she decided they weren't good enough to include in Triumph of the Will—and that that omission had ruffled feathers). She doesn't mention Berchtesgaden über Salzburg (1938), a film Susan Sontag ascribes to her and calls "a fifty-minute lyric portrait of the Führer against the rugged mountain scenery of his new retreat [in Berchtesgaden]" in a review in The New York Review of Books (see below)—although an exchange between David B. Hinton and Sontag regarding the above-mentioned review raises doubts about Riefenstahl's connection to that film; pinning down the facts about Riefenstahl is often challenging.

She comes across as either terribly naive or deeply disingenuous. She never confronts the issue of her complicity in the crimes of Nazi Germany. She wants us to believe she was working solely as an artist, objectively documenting the party rallies—but it's hard to believe it never occurred to her that she was also making propaganda. She was a perfectionist. She may have been incapable of doing anything but her best and it might be argued that it wasn't her fault that Hitler admired her work and saw her value. Yet, she could have left Germany if the highly nationalistic, anti-Semitic rhetoric of Hitler and his party truly disturbed her, and much evidence seems to suggest she was a willing participant. Nevertheless, she asks the reader to believe she simply was unable to resist the chance to work on a subject as dramatic as Hitler and the Nazi Party rallies and that she felt unable to refuse Hitler—not that she was a true believer.

Much of the immediate post-war period Riefenstahl spends in and out of detention by the allies, losing and attempting to regain possession of her belongings, including her films. In Riefenstahl's portrayal of things, bad luck meets her at every turn, she is dogged by lying detractors bent on keeping her from working, and it's one personal disaster after another. She is suing people for libel left and right. Some of the animosity directed at her does appear to have been simple spite, and criticism of Olympia solely as a propaganda film seems somewhat misplaced, but she never understands why so many continued to shun her; she always sounds strangely naive, self-absorbed, and intent on forgetting inconvenient parts of her past.

By the time she turns to Africa in the mid- to late 1950s, enough time has passed that she finds sufficient support to move forward with her artistic endeavors, nevertheless suffering setbacks all along the way—setbacks always cast as the result of her victimization by enemies. Eventually her attention turns specifically to the Nuba tribe, in remote areas of the Sudan. Getting to and from these rarely visited parts of Africa to film and photograph would sap the energy of most people half her age. She is nothing if not energetic, persistent, and—despite bouts of depression and physical illness exacerbated by her financial and artistic setbacks—optimistic. It's extraordinary that she succeeded in getting several books of photography about the Nuba produced in her 70s and 80s. At the age of 74, she takes up scuba diving, and, in addition to photographing the Nuba, she begins to learn underwater photography.

The end of the book is anticlimactic. As Riefenstahl brings her story to a close, the reader is left still hoping for some reflection on the meaning of her work during the Nazi era, some admission that—even if truly unintentionally—her work served Hitler's cause, but that reflection never comes. Susan Sontag, in a review of one of the Nuba books in the New York Review of Books entitled Fascinating Fascism (February 6, 1975), offers a very different view of the meaning of Riefenstahl's life work from the one Riefenstahl herself offers, arguing for the presence of a consistent vein of fascist aesthetics running from her earliest film work through the Nazi-era films and into the African photography. It's worth reading both views. Riefenstahl died in 2003, at the age of 101. Thus, her memoir deals with her first 85 years. The book is an interesting read despite the hard-to-avoid feeling that Riefenstahl's story is told in the voice of an unreliable narrator. I wonder if there is an informed, truly objective biography available?

[Update: Perhaps Steven Bach's The Life and Work of Leni Riefenstahl is that book? A review of Bach's biography in The Guardian.]
Posted by Colin Talcroft at 12:35 AM