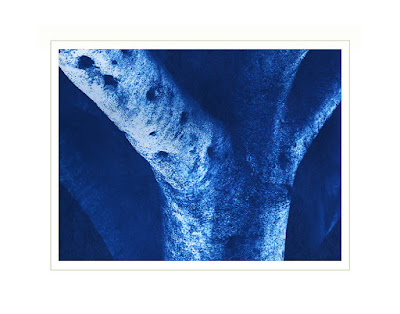 My first cyanotype attempt. An interesting failure. On the whole, though, better than I thought likely for a first try. The most obvious problem is the paper I used, which is too light and absorbent. It was looking blotchy already when I coated it with the cyanotype solution--although the finished image is much less obviously blotchy than the paper was when wet, after it had dried following the initial coating, or after exposure and during "development". The image itself is too contrasty. The highlights in the branch on the left are whiter than I want (the scan here is better than the original, with the bright whites softened). Still, this is in the ballpark.

The image shown here was made using the Bostick & Sullivan cyanotype kit, a traditional cyanotype formula. I used 90 drops of finished solution (45 drops each of parts A and B mixed) to coat an 11 x 14 inch sheet of paper. The exposure was about 8 minutes in late afternoon sunlight on March 19, 2016 (partly cloudy). The digital negative (printed on PictoricoPro transparency film, using the glossy photo setting on an Epson 3880 printer) was made from a color digital image converted to B&W that I then adjusted using a cyanotype curve I found online. I next converted the B&W image to orange by using Color Balance, in Photoshop, boosting the yellow and red sliders all the way up. I then flipped the image horizontally so that the image would be right way around when placed against the cyanotype paper with the printed side closest to the paper (flipped). With the rain, I'll be able to expose no more images today, but I may go to the art supply store to seek a better paper to work on. I'm also reading up on toning cyanotype prints with tea, which darkens the highlights a little and converts the bright Prussian blue of the cyanotype to a bluish brown.

[Now, more than two years later (in November 2018), I'm trying to learn cyanotype photography in earnest. Here's a link to a post about my latest efforts.]
Posted by Colin Talcroft at 12:26 PM