Book I'm Reading: Hero: The Life and Legend of Lawrence of Arabia 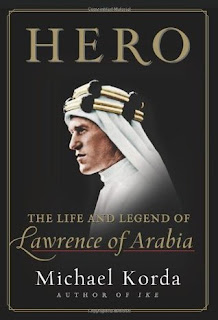 Much has been written about Thomas Edward Lawrence, better known as Lawrence of Arabia. I've read five or six biographies myself. This one—Hero: The Life and Legend of Lawrence of Arabia (By Michael Korda, Harper, 2010)—is probably the best of those. It seems unusually well researched, it's fluidly written, and, perhaps most important, while it details Lawrence's time in the desert with the Arab Revolt, it presents a balanced picture of his life, devoting more space than usual to his childhood and also to his later days, after he attempted to retreat into anonymity as an airman in the budding RAF. In the first instance, Korda elucidates Lawrence's relationship with his religiously zealous mother in particular, in the latter, his uncanny ability to stay connected with and influence the most influential people in Britain even as an airman. His intellect was irresistible. Reading Hero, I'm left wanting to read Seven Pillars of Wisdom again.
Posted by Colin Talcroft at 7:52 AM