Music I'm Listening To: A Week of Music

I heard Midori in recital at the Green Music Center on April 23 and Hilary Hahn in recital at Davies Symphony Hall on the 26th. On the 29th, I'll be in San Francisco again to hear a concert conducted by Pablo Heras-Casado featuring Shostakovich's Symphony No. 9. It's sad a name as big as Midori can't fill the Green Music Center. Filling the hall seems to have been a persistent problem since its opening, about four years ago. The first two seasons, I was delighted to subscribe to reasonably priced San Francisco Symphony concerts at the Center, but that program was abandoned—because the hall was usually no more than two-thirds full. Is Rohnert Park too far to drive if you live in San Francisco? I suppose people who live in San Francisco don't feel the need, no matter how good the sound, and it appears the native (Sonoma County) audience for classical music isn't big enough to support the venue unaided. I've heard it suggested that the Center hasn't been well enough advertised in San Francisco. Perhaps attendance will pick up if Bruno Ferrandis is replaced by a better, more charismatic conductor at the Santa Rosa Symphony (his contract runs out at the end of this season and will not be renewed).

At the Midori recital on the 23rd, I sat in the seats behind the stage for the first time. They are closer to the performer than I realized, but it's easy to forget how directional the sound projection of a violin is. I remember noticing sharp changes in dynamics at concerts by Kyung-wha Chung (who virtually dances while playing, frequently turning from side to side). Midori, mostly facing away from my vantage point, was sometimes hard to hear, especially during the opening piece, a Bach sonata for violin and piano that lacked impact. However, I very much enjoyed her performance of Schubert's C Major Fantasy for Piano and Violin (although it always seems a little longer than it needs to be) and her performance of the Brahms Piano and Violin Sonata No. 1, in G Major). Two pieces by Tchaikovsky rounded out the program—The Valse Sentimentale and the Valse-Scherzo. Midori also played an encore, a song by Grieg, as she told us in the lobby after the performance. She was accompanied on stage by pianist Özgur Aydin. 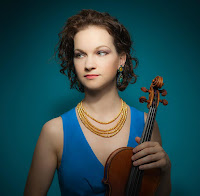 I've heard Hilary Hahn twice before in San Francisco, playing the Tchaikovsky violin concerto, with James Gaffigan conducting, and playing one of the Prokofieff concertos, with Osmo Vänskä conducting. I'd never heard her in recital before. It was an excellent opportunity to listen closely to the sound of her violin (according to the Wikipedia article on Hahn "an 1864 copy of Paganini's Cannone made by Vuillaume"), which seems particularly sweet in the mid-register and rather nicely balanced throughout its range, unlike some violins that seem to favor either the low or the high end.

The program was varied, earlier music in the first half, more modern music after intermission. It began with Mozart's Sonata in G Major for Violin and Piano (Cory Smythe accompanying) followed by the Bach Sonata No. 3 in C major for Solo Violin. Hahn played the Bach absolutely purely, absolutely correctly—every note articulated and right where it was supposed to be—without sounding in the least cold or distant, somehow being  utterly confident and charismatically present yet almost transparent, the music seeming to flow through and out of her. Her performance was mesmerizing—probably the most convincing performance of one of the Bach solo violin pieces I've ever heard, its only possible rival in my experience being one by Itzhak Perlman I heard as a college student in the early 1980s in Columbus, Ohio. Hahn was deeply moving. The entire audience immediately rose to its feet after she finished and brought her back on stage to acknowledge the applause several times before letting her go and starting the mid-concert leg stretch. She wore a beautiful floor length skirt—black with embroidered metallic discs.

She was equally impressive in a selection from Anton Garcia Abril's Six Partitas for Solo Violin (which I'd like to hear more of), in the Copland Sonata for Violin and Piano that followed, and in Tina Davidson's Blue Curve of the Earth, which is one of the 27 pieces Hahn commissioned for her recording In 27 Pieces (Hahn played this as an encore at the May 25, 2012 concert with Osmo Vänskä that I attended, so I've heard her perform it twice now).

For an encore, Hahn played the world premiere, she said, of Catch, by Aaron Severini, one of the honorable mentions among the 400 or so pieces she received as entries in her encore competition. She spoke directly to the audience in introducing the piece. After the concert, signing autographs for the longest line of people I've ever seen at Davies Symphony Hall waiting for a signing, she kindly wrote the name of the piece in my program for me. She gives the impression of being an extremely gracious, down-to-Earth person. When I asked her to date the CD cover she signed for me, she didn't know what day it was. It must be hard to keep track sometimes when you travel as much as a touring performer does.

[Update: The concert on the 29th was wonderful. Heras-Casado was overflowing with energy and so was the music. The program included Dance Suite by Bartok, the world premiere of Auditorium, by Mason Bates, Ravel's Le Tombeau de Couperin, and Symphony No. 9, by Shostakovich. ]