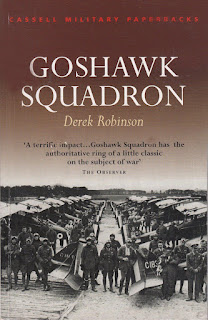 Derek Robinson's Goshawk Squadron (Cassell Military Paperbacks) was first published in 1971, but I read the 2000 edition pictured. This is one of the books left behind by my father who had an interest in military history, among many other things. It's not something I would have bought myself and I went into it with no particular expectations, but it turned out to be well written.   The central character, is the young but seasoned leader of Goshawk Squadron who has a simple, brutal philosophy: aerial combat is about killing enemy pilots. The idea of chivalry in the air is alien to him. He sees no honor in combat. He does his best to drill this idea into a string of utterly green replacements in the hope of keeping some of them alive. This reminded me a little of Andersonville, which I recently read, in that it is fiction but fiction apparently based on careful research. Much of the impact of Goshawk Squadron can be traced to the fact that it feels entirely authentic. A short but worthwhile read.
Posted by Colin Talcroft at 9:47 PM