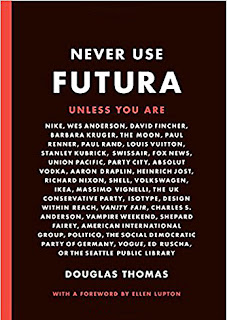 If there's a typeface nerd in your circle of friends and family members, here's a great Christmas present idea. Douglas Thomas's Never Use Futura (Princeton Architectural Press, 2017) is a look at one of the most enduring modern typefaces. Futura and its variants are so common today we hardly see them any more, but they're everywhere, as a pictorial section of the book entitled "Futura in the Wild" clearly shows. Louis Vuitton, The Limited, Nike, Valero, Volkswagen, Swissair, Absolut Vodka, Vogue, Apple, Bed, Bath & Beyond, and the US Post Office, among many others have relied on its crisp, geometric forms for branding, but it's a much older typeface than I realized, having been first created around 1925. It rapidly caught on, becoming the go-to font for projecting a modern feel, both in Europe and the US. In its home country of Germany, it was, in particular, part of an internationalist trend in reaction to the peculiarly Germanic fraktur typefaces. The book looks at Futura from numerous angles—at its position in the history of typography, at its structure, at its political applications, and at its extensive use in advertising. It's always been a favorite of mine, despite my ignorance about its past. I use it myself in all the advertising for The Art Wall at Shige Sushi and in advertising material for my own art work. Its appeal is simple: when used in all caps, it creates neat, compact lines of text that are easy to incorporate into graphic design. Recommended--both the font and the book.
Posted by Colin Talcroft at 9:50 PM