I attended the January 28 evening performance at Davies Symphony Hall. Conductor Thierry Fischer replaced Charles Dutoit on the podium, but the program was otherwise unchanged. He led the Royal Philharmonic Orchestra. The concert opened with Debussy's Petite Suite, followed by Haydn's Cello Concerto No. 1 and, after intermission, Stravinsky's Firebird Suite. Gautier Capuçon was soloist in the Haydn concerto.

Technical brilliance is by no means the only measure of a performer or a performance, but Capuçon is one of those who enters the stage with an aura of utter confidence and plays with such surety that, as a listener, you can take in a live performance with no anxiety—knowing that whatever happens on stage will be right. He is entirely persuasive. His performance of the Haydn concerto was taut with energy, passionate and gritty in places, yet lyrical where lyrical was called for.

Maybe it's just me, but when I listen to cello performances, I often find the four strings can have rather obvious differences of tone that don't always mesh well. The high string will be strident relative to the others or the low string too boomy. I thought Capuçon's cello unusually in synch with itself. According to Wikipedia, he mainly plays a 1701 instrument made by Matteo Gofriller, but also has a 1746 instrument by Joseph Contreras (both on loan to him). I don't know which he played on Sunday, but I liked its sound.

The audience was very appreciative. Following an extended standing ovation, Capuçon played El cant dels ocells (Song of the Birds) as an encore, supported by a number of cellos and basses in the orchestra. This Song of the Birds, based on a traditional Catalan song, seems to be a favorite encore among cellists following in the footsteps of Pablo Casals who regularly played it after concerts as a form of protest against the fascist Franco regime of Spain. I've heard  Zuill Bailey play it as encore as well. 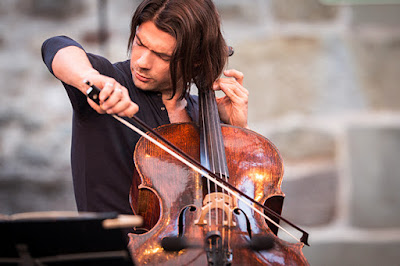 Debussy's Petite Suite is always pleasant and it was fun to hear The Firebird Suite live. It's one of those pieces that offers a lot to look at on stage. I thought the performance of the latter a bit lacking in coherence here and there, but good overall. The audience was again very appreciative, offering another long standing ovation that resulted in another encore, the orchestra doing a lively run through something from one of Bizet's L'arlisienne suites. I noticed the Royal Philharmonic seats its musicians a bit idiosyncratically. Often European ensembles put the cellos stage right (while we usually put them stage left). In this case, the cellos were stage right but on the inside with the violas on the outside, closest to the audience. I noticed also that the Royal Philharmonic brought its own music stands.*

[*Correction: It appears that the San Francisco Symphony has acquired new music stands. They were still present at the next concert I attended. They're attractive.]

Photo of Thierry Fischer by Marco Borggrove. Photo of Gautier Capuçon by Gregory Batardon. Photos courtesy of the San Francisco Symphony.
SaveSave
Posted by Colin Talcroft at 10:00 AM