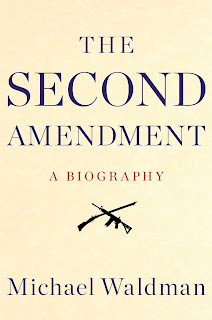 It seemed an appropriate time to buy The Second Amendment: A Biography (Simon & Schuster Paperbacks, 2014) when I picked it up, remaindered, at a local bookstore last year. That was before the Parkland, Florida shooting. It now seems even more appropriate to have acquired it. Having just finished the book, I can say it's an excellent introduction not only to the historical context of the 2nd Amendment's writing but to the transformation it's undergone in the past few decades—its transformation from a clause written by the founders out of fear of a standing army controlled by a tyrannical government into a statement of a fundamental individual right to own guns, a transformation effected by controversial court decisions that have had and will continue to have tragic consequences.

The Amendment, stated in full, seems simple: "A well-regulated Militia, being necessary to the security of a free State, the right of the people to keep and bear Arms, shall not be infringed." It is one of the shortest amendments to the Constitution. It has engendered disproportionate discord. While its interpretation—notably, whether it guarantees an individual's right to own and use guns—was first challenged long ago, by 1840 the idea was firmly established that the object of the Amendment was public defense not private gun ownership and that the term "bear arms" was understood to have a military meaning. This view was made explicit in a Tennessee Supreme Court ruling in that year stating, in part "A man in pursuit of deer, elk, and buffaloes might carry his rifle every day for forty years, and yet it would never be said of him that he had borne arms...."

The push to subvert these ideas began in the 1950s and gained steam in the 1970s, although the individual rights view long remained a fringe view even then. By 2008, however, District of Columbia v. Heller had overturned about 200 years of precedent. What made that possible, was intense lobbying by the NRA. Author Michael Waldman points to a survey of law review articles on the 2nd Amendment from 1888 to 1959 and notes that not a single one in that period concluded the Amendment says anything about individual gun rights. The first to contradict that idea appeared in 1960, the start of a flood of writing supporting the view. Waldman quotes one Carl Bogus (a real historian, despite his name) who points out "From 1970 to 1989, twenty-five articles adhering to the collective rights view were published [in law reviews] (nothing unusual there), but so were twenty-seven articles endorsing the individual rights model. However, at least sixteen of these articles—about 60 percent—were written by lawyers who had been directly employed by or represented the NRA or other gun rights organizations." Thus, through strategic long-term planning, the NRA and its supporters were well on their way to success in changing the legal meaning of the Amendment already by 1989. Still, Waldman argues, historians had not at that time (and largely still haven't) changed their view of the meaning of the Amendment—despite subsequent legal developments—which is to say that current law, underpinned by Heller, defies logic and the majority view, reflecting a minority viewpoint vociferously defended by the NRA and other lobbyists for gun manufacturers.

It would take almost 20 more years to get us to the Heller decision, and a willingness to toss aside the 2nd Amendment's initial clause "A well-regulated militia, being necessary to the security of a free State...." Waldman points out that Justice Scalia, in his majority opinion in Heller, essentially ignored that clause, as does the abridged quote of the Amendment on the wall of the lobby of NRA headquarters, which reads only "The right of the people to keep and bear Arms, shall not be infringed" as if the prefatory clause does not exist. What allowed the Heller decision to, as Waldman puts it, use "pages of highly selective historical readings from two hundred years ago that ignore the history of the past hundred years" to essentially rewrite the Constitution was a shift in public opinion among a disproportionately vocal minority, coached and underwritten by the NRA. Essentially, the Heller decision became possible because of NRA influence on public opinion. The 2nd Amendment doesn't and never did mean what Heller proclaims it to mean, but Heller has established a new basis for interpreting the Constitution.

Waldman's book is well worth the time it takes to read for the deep context it gives to the current difference of opinion about gun law in the United States. The essential conclusion I have drawn from reading the book is that I have been right in my conviction that the 2nd Amendment's meaning has been perverted, that District of Columbia v. Heller, like Citizens United, was a disastrously misguided decision, but that we are stuck with it. We are forced to live with it and to die with it, for the time being, at least.
Posted by Colin Talcroft at 10:42 AM