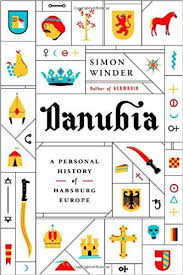 Simon Winder's entertaining Danubia (Farrar, Straus and Giroux, 2013) is subtitled "A Personal History of Habsburg Europe," which gives the author ample room to digress, and the digressions are reliably entertaining—in places laugh-out-loud funny. The book is broad in scope, covering the history of Central Europe from the end of the Middle Ages to WWI, but Winder allows himself space to talk about music and art when the Habsburg ruler of the moment is a bore or to offer odd tidbits about some of the many places he explored on foot doing research for the book. That is, the book deftly balances the grand sweep of history with quirky anecdote and detail. His enthusiasm for his subject is palpable and contagious.

Perhaps the strongest impressions the book leaves are, first, that the history of Western Europe, dominated for so long by the Hapsburgs, might have been very different for any number of reasons—that the Hapsburgs remained in control of things (to the extent that they did) for as long as they did often as much because of luck as anything else—and, second, that large swaths of Central Europe were settled by one group of people, completely de-populated (ravaged by war, disease or both) and then resettled so often (rinse and repeat) that few of the ethnic narratives that have fueled rabid nationalism in modern history (meaning the past 200 years or so) have much basis in fact—that they are often myths fueled by little more than wishful thinking and opportunism.

To say that the history of Central Europe is confusing is an understatement. I'm not sure reading Danubia did as much to clarify things as I would have liked, but, having read the book in anticipation of a trip to that part of the world in June, I feel somewhat more prepared than I might otherwise have been. All joking aside, the book has at least helped me to better understand the history of the Holy Roman Empire, of the House of Habsburg, and of the 30 Years' War, among other institutions and events, if not allowed me to remember precisely which Charles, Franz, or Rudolf did what when. Recommended.
Posted by Colin Talcroft at 10:52 AM