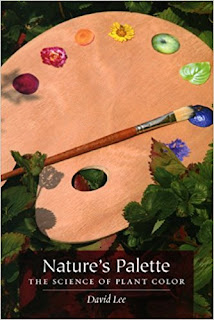 Nature's Palette: The Science of Plant Color, by David Lee (Universtiy of Chicago Press, 2007) was an interesting read, but it was rather more narrowly focused than I expected it to be when I acquired it. The book deals mainly with the biochemistry of pigmentation in plants while touching only glancingly on the history of pigments made from plants, a subject that interests me more. It reads a bit like a doctoral thesis.

Despite the narrow focus on plant biochemistry, there was enough about the importance of plant colors as adaptations to available light in different environments and about the physics of structural color (as opposed to color resulting simply from the reflectance of particular wavelengths of visible light) to keep me from abandoning the book before finishing it. Notable also for its many full-color photographs. Printed on high-quality coated paper that make the book very heavy. 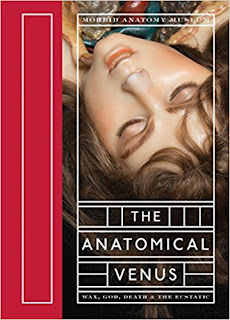 Even more lavishly illustrated with photographs is Joanna Ebenstein's Anatomical Venus: Wax, God, Death, and the Ecstatic (Distributed Art Publishers, 2014), which looks at the history of dissectible, mostly female, wax anatomical models made chiefly between the Renaissance and the nineteenth century. These were painstakingly crafted in mostly European workshops, the most famous of which was at La Specola, in Florence, where the famous Medici Venus (also known as the Demountable Venus) was made between 1780 and 1782 by the workshop of Clemente Susini.

These models were conceived as a way to teach human anatomy without the need for dissection of cadavers—which was (and is) smelly, messy, ethically questionable, and dependent upon a supply of dead bodies—but they were made at a time when the human body, and specifically the female body, capable of birth, was understood to be a reflection of the perfection of god, emblematic of the relationship between man and god. The Anatomical Venus attempts to contextualize these figures by examining how they were used and received in their own time, at how they came to be understood later, mainly in the nineteenth century (when they were just as likely to be seen in a sideshow as in a medical setting), and at how they have been viewed more recently.

What makes them bizarre and disturbing to us today is that they are beautiful and beautifully presented. They are tricked out in ways that seem unnecessary to their utility as anatomical teaching tools, often with real eyelashes and real human hair, bedded in fine linens, and enclosed in handmade glass and wood display cases. Their entrails spill out of them, yet they are posed as if blissfully asleep or in a moment of ecstatic possession. Are they art? Are they medical teaching aids only? Are they memento mori? Are they in some ways pornographic? The Anatomical Venus attempts to answer all these questions.
Posted by Colin Talcroft at 12:29 PM