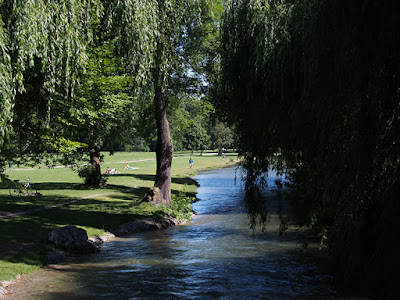 On the ICE express from Munich to Leipzig by way of Nuremberg and Erfurt, the countryside is mostly wheat and corn fields but also I have seen large fields of vines trained up high on wires—surely hops for making beer. This is Bavaria after all. I didn't make it to a beer hall while in Munich, but I have a bottle of the local brew in my bag for later. The people of Munich certainly consume a lot of it. There are beer halls everywhere and beer bottles everywhere, too, although, in general the city is quite clean.

I spent the morning walking around the English Garden, which includes some surprisingly thick stands of large trees, as well as streams and lakes and large open meadows. A team of Indian or Pakistani amateur cricket players was using one of the meadows for some practice, sharing the space with a flock of geese.

I went to the garden to do some bird watching. I heard a lot of loudly singing birds, but, the singers tend to stay high in the trees and hidden, which is rather frustrating. That said, I saw the ubiquitous local blackbirds and many tits (Great Tits, I think in this case), and I did add two new birds to my life list: the Fieldfare (a Robin-like thrush) and the Great Spotted Woodpecker. I managed to get photos of both. It was interesting also to see female Mandarin Ducks, which look only subtly different from the females of our closely related Wood Ducks.

Posted by Colin Talcroft at 5:59 AM