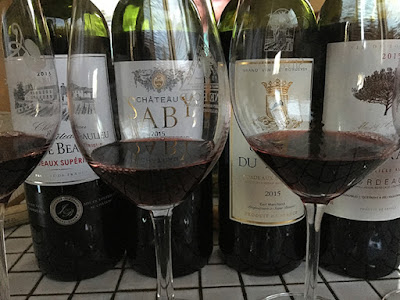 It's been quite a while since I sat down and did a comparative blind tasting of cheap wines from Grocery Outlet, but, as 2015 was such a good year in Bordeaux, it's likely that even small, little-known producers made good wine. I tasted four wines from my local Grocery Outlet in the hope of discovering at least one gem worth going back to stock up on. Brief tasting notes follow.

2015 Château Jalousie Beaulieu Bordeaux Supérieur
Medium ruby red. Typical color for a young Bordeaux. Fairly closed at first, with vague hints or red fruit—cranberries, perhaps—and oak. Later something a bit metallic on the nose. Initially seems quite ripe on the palate but with pronounced tannins on the mid-palate that fade into a fruity, moderately long finish with decent acidity. Not exciting at first, but balanced, and with promise. With a little time in the glass, began to suggest cherries and roses on the palate, becoming richer, more approachable.  $6.99

2015 Château Saby Bordeaux Supérieur
Again, a medium ruby red. Typical color for a young Bordeaux. Closed at first, but with distinct earthy notes not present in any of the other wines. Later, some floral scents. Has considerable body and presence on the palate. Round, fruity, and with light tannins. A bit hot for a Bordeaux, and, checking the label, I see that this is 14%, the most alcoholic of the four wines. Immediately appealing for its up-front fruitiness, but could do with more tannin and a bit more acidity. Seems somewhat unbalanced—too alcoholic. Likely to appeal to California palates used to big, fruit-forward wines. This one is 100% Merlot. $7.99

2015 Château du Peuil Bordeaux Supérieur
Medium ruby red. Fairly typical color for a young Bordeaux but this was the palest of the four wines. Flowery, perfumey scent at first, with leather and candied citrus rind in the background, fading later in the direction of woody scents. Less fruity than the other three wines on the palate, at least at first. Flavors tending toward wood and leather with the citrus element present on the palate as well. Overall, light, very soft tannins, and a little low in acidity, yet with enough nuance in the flavors to make it interesting. My favorite of the four wines on first tasting (also see below). Only $4.99 a bottle.

2015 Château du Pin-Franc
Medium ruby red. Again, fairly typical color for a young Bordeaux but this was the deepest in color of the four wines. Initially very closed. Little scent on the nose at all. Later developed suggestions of cherries and wood. Quite closed on the palate as well. Good tannins. Likely to need time to develop. An attractive push of red fruit on the finish, but, ultimately, not very approachable at the moment. Would be interested to try this again in about five years. $6.99

Any of these four wines is a decent value. Ranging in price from $4.99 to $7.99, it would be hard to fault any of them. My initial impression was that the cheapest, the Château du Peuil, is the best, but given a little time to open up, the Château Jalousie Beaulieu began to seem more interesting than at first. The Pin-Franc may improve with time. That said, coming back to them the morning after, the Château du Peuil still seemed most appealing. Although it's a bit disappointingly light in body, it has a resiny, citrusy quality that I liked. I went back for more.

I have no financial or other connections with any producer or retailer of wine. For more wine reviews, use the "Wines I'm Drinking" label at top right
Posted by Colin Talcroft at 8:24 PM