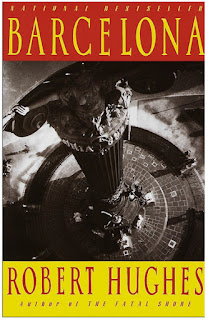 I don't know how long ago I picked up Barcelona, by Robert Hughes (Vintage, 1992). It's been on my bookshelf for a long time. Could it have been sometime after I visited the city, in 2010, prompted by that visit? It's a book I ought to have read before going to Barcelona, but, even long after my trip there, it was a worthwhile read. The book clears up a lot of misconceptions about the city and about Catalonia more broadly. Notably, it makes clear the relationship between Catalan and Spanish (Catalan is not a dialect or corrupt form of Spanish, as so many seem to believe) and it goes a long way toward explaining why Barcelona and the rest of Spain have so long been at odds with one another.

The book is dense, particularly in its first half, which devotes rather a lot of space to political history, with a long cast of characters that can be hard to keep straight, but Hughes is a consummate writer. His prose is lucid and he's a lot of fun to read almost regardless of  subject matter because of that and because of his inventive use of language. The clarity of his writing makes it possible to push through the more difficult sections until you get to what seemed to me more interesting material; Hughes really comes into his own when he turns to art and architecture.

When we think of art and architecture in the context of Barcelona, we tend to think only of Antoni Gaudí. This book puts Gaudí into his historical context and explains his relations with the people that became his patrons, mostly Eusebi Güell i Bacigalupi. Hughes introduces a host of other architects working at the time, several of them far better known in their day than Gaudí, most notable among these Lluís Domènech i Montaner, designer of The Palau de la Música Catalana, which is dissected in detail (as are many of Gaudí's most important projects, including Sagrada Familia, which, Hughes notes, has became a travesty of itself). Again, I would like to have read this before having visited Barcelona's many architectural gems years ago, but the critiques were very pleasurable to read nevertheless.

Likely to be a bit too demanding for readers casually interested in Barcelona, but a very satisfying deep dive for anyone with a serious interest in history, particularly history of art and architecture. Recommended. Read it before you go.
Posted by Colin Talcroft at 3:00 PM