Books I'm Reading: American Eclipse and The Education of a Coroner 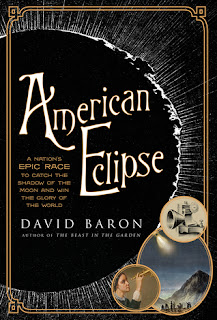 I've recently finished two books—David Baron's account of the total solar eclipse visible across much of the American West in 1878, The American Eclipse (Liveright, 2017) and The Education of a Coroner (Scribner, 2017). The 1878 eclipse path stretched from the northern tip of Idaho to the heel of Louisiana. Author Baron suggests the eclipse offered the first opportunity to show skeptics that American scientists could hold their own against more seasoned investigators in Britain and Europe, and it was the first total solar eclipse widely visible in the Western United States since the nation's founding, according to the book (although there appears to have been a total eclipse on August 7, 1869 with a path that stretched from Alaska to North Carolina; perhaps that eclipse came too close to the end of the Civil War for much to have been done about it), but as many as one hundred expeditions were organized to view the 1878 eclipse.

Baron focuses on three groups of eclipse viewers. One was organized by astronomer James Watson, known as a planet hunter (more precisely, as discoverer of asteroids), who appears to have been chiefly interested in the opportunity the eclipse seemed to present to see the planet Vulcan, said to orbit the sun inside the orbit of Mercury (he claimed to have seen it; the claim proved a distraction to the pursuit of astronomy for many years subsequently). Another group was led by Maria Mitchell, a pioneer among women interested in the heavens. The third group included inventor Thomas Edison who was eager to gain the respect of serious scientists. He brought with him his "tasimeter," a hyper-sensitive heat-detecting invention with which he hoped to measure the heat of the sun's corona during the eclipse (it proved a failure).

Trips into remote parts of Colorado and Wyoming presented numerous difficulties. All the groups had to put up with primitive accommodations, while Maria Mitchell and her all-female entourage (primarily gifted students of astronomy she taught or had taught at Vassar) had the additional burdens of dealing with prejudice against the undertakings of a woman scientist and of trying to locate equipment lost by a railway company more interested in a feud with a competitor than it was in locating luggage critical to her investigations (ultimately recovered in the nick of time). Edison garnered far more attention in the press than Mitchell, despite her credentials.

Although the book seemed a bit anti-climactic as it devotes little space to the eclipse itself (being focused on the events leading up to the event), it appears to have been meticulously researched and it is well written and entertaining. Recommended. 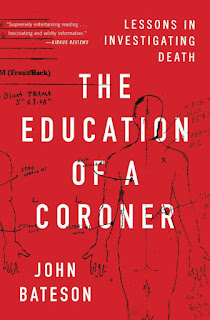 John Bateson's The Education of a Coroner, subtitled "Lessons in Investigating Death," presents a selection of cases handled over the years by Ken Holmes, who worked for 36 years in the Marin County Coroner's office, starting as a death investigator and ending his career as the county's coroner. The case studies involve everything from obscure but intriguing incidents such as the discovery of a Golden Gate Bridge suicide with no labels in his clothes and no suicide note who was identified only by chance more than twenty years after his body was found to a few high-profile cases, such as the case of the so-called  Trailside Killer, whose first victim was found on a Mt. Tamalpais trail in 1979.

Beyond the case studies, the book is interesting for the procedural details it gives, for its look into how coroners operate in general, for its local focus (many of the locations discussed will be very familiar to residents of Northern California and San Francisco), and for its look at how politics impinged on the career of Mr. Holmes. Worth the time.
Posted by Colin Talcroft at 11:23 AM