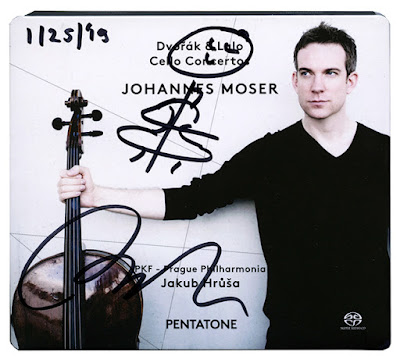 I first heard of and heard cellist Johannes Moser when he appeared with Edward Gardner conducting the Santa Rosa Symphony, in 2007. He played Elgar's Cello Concerto. I don't have the clearest memory of that performance (it was a year before I started writing this blog) but I do remember thinking he was outstanding. I subsequently looked for him often, but he seems to perform mostly in Europe. So, I was thrilled to learn that he would be among the guest artists performing  with the San Francisco Symphony this year (his debut with the Symphony). I attended the January 25 performance, which included Richard Strauss's Don Juan, Lutoslawski's Cello Concerto, with Moser the soloist, and Prokofiev's Symphony No. 5. Resident conductor Christian Reiff on the podium did a very creditable job, I thought.

I don't know Don Juan well, but Reiff had the piece well in hand from the get-go. Never a dull moment. The energy was remarkable. Too often the opening piece on a program serves as a warm-up  with nothing quite gelled. Not so in this case. The same energy was present throughout the Lutoslawski and after intermission. 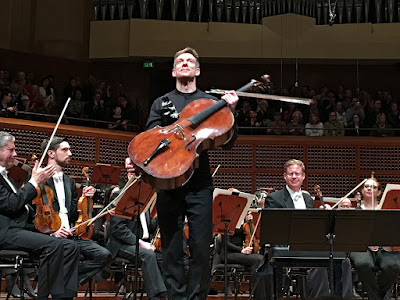 The Lutoslawski concerto is a fairly obscure piece by a composer even many classical music enthusiasts don't know well, but I'm quite familiar with it, having many years ago purchased a CD of Rostropovich playing the concerto (along with  Dutilleaux's Cello Concerto--EMI CDC 7 49304 2). The piece was written for Rostropovich (premiered by him in London in 1970). Although I've heard it many times, I'd never seen it performed before. In a letter from Lutoslawski to Rostropovich (quoted in the liner notes to the EMI recording and in the San Francisco Symphony program for the Johannes Moser performance), the piece is described as a kind of battle between the soloist and the orchestra. Although the Cello Concerto opens rather languidly with a repeated single note on the cello (which Lutoslawski says in the letter to Rostropovich is to be played in an "inexpressive (indifferent) manner" things quickly escalate and Moser not only played the music, he played the piece rather theatrically—pugnaciously—jabbing and sawing, with every stroke in the aggressive sections seemingly a deliberate provocation aimed at the orchestra, which gave as good as it got. I was reminded of the famous description of the premiere performance of Tchaikovsky's Violin Concerto by unsympathetic critic Eduard Hanslick who complained that 'The violin is no longer played; it is pulled, torn, drubbed." While that was intended as a criticism, what a spirited and delightful performance Moser gave us. He had the audience giggling in places at his antics on stage, but never did he let the presentation get in the way of his tautly precise playing. He was marvelous. A memorable performance. Among the best I've seen in San Francisco—and that's saying a lot. I hope we'll see more of Moser here.

As an encore, he played a section of one of the Bach Cello Suites, introducing the piece by saying "And now for something completely different," which got another laugh. After the concert I had the pleasure of speaking with him briefly. I regret not asking him if all performers are so expressive when playing the Lutoslawski, but he remembered his performance with the Santa Rosa Symphony years ago and seemed pleased that I had enjoyed it and mentioned it and come back to see him. He autographed a CD for me and even added a doodle of himself playing the cello.

I thought Reiff handled the Prokofiev well, particularly the second movement, which I think among the most thrilling symphony movements ever written, when done well. Although I thought the first movement a little unsettled in places and I think the second movement should be launched into right away, while the tones of the first are still ringing in the ears (audience applause prevented this), overall, it was a fine performance. That second movement soars. It has a remarkable buoyancy and an irresistible momentum—again, when done right—and Reiff achieved that. It's a feeling few other pieces can generate, although I've had the same sensation when listening to the final movement of Dvorak's "American" quartet and in places in Schumann's Cello Concerto. It creates something of the thrill of effortless skiing—a rapid but relaxed, floating, forward motion. Again, this concert was a standout among the many fine concerts I've had the pleasure of attending recently.
Posted by Colin Talcroft at 1:47 PM