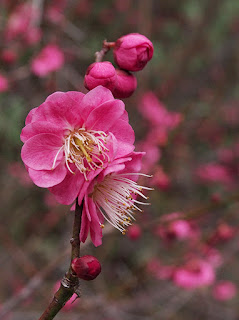 I've been keeping track of the first flowering of many plants in the garden for about eight years now. I have analyzed the data to see if the flowering period of plants are shifting, which was my original intent in creating a kind of botanical calendar, but the Rhododendron "Noyo Dream" bloomed today, which seems very early. Usually this plant blooms in February or even early March. For example, "Noyo Dream" bloomed on February 25 in 2009, on February 7 in 2010, on February 2 in 2011, and March 2 in 2012.

On January 13, the first blossoms opened on the pink flowering plum alongside the house. Today both this plum and the white plum on the other side of the house are in full bloom and buzzing with bees. 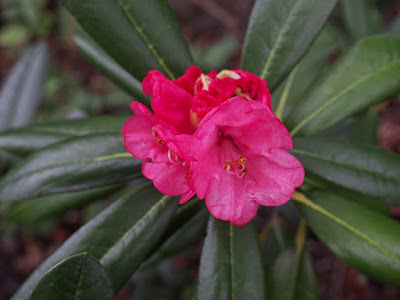 Posted by Colin Talcroft at 3:03 PM